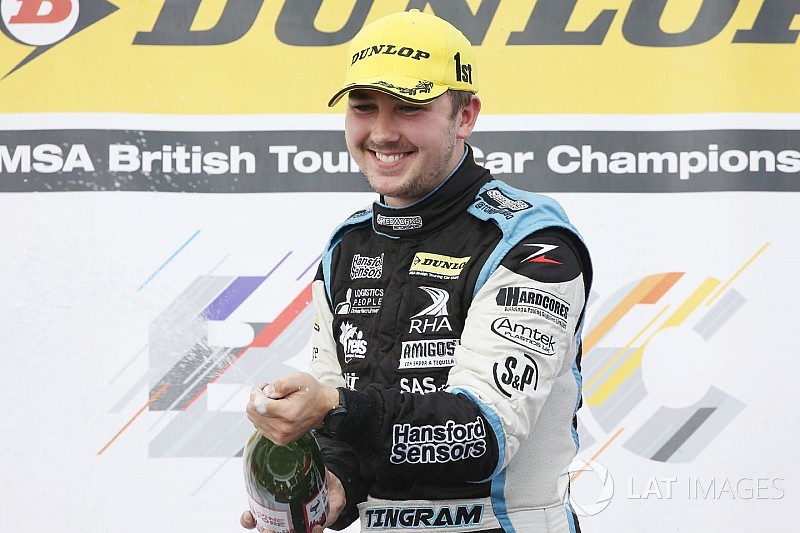 Tom Ingram won a truncated first BTCC race at Silverstone, which was cut short after a huge incident involving Rob Collard, Andrew Jordan and Will Burns.

Speedworks Motorsport driver Ingram started the race from second on the grid but got the jump on polestar Jack Goff on the run to Copse to take the lead.

Eurotech Honda driver Goff stayed with Ingram in the opening laps but fell away from the leader as a short shower intensified around the back end of the circuit.

Ingram had dropped Goff before the race was then neutralised at two-third distance for a huge shunt involving WSR BMW drivers Jordan and Collard plus the Volkswagen of Burns.

As the midfield pack bunched on the run to Maggots, the MG of Aron Taylor-Smith tapped Collard after he appeared to have been hit himself.

While Collard attempted to correct a slide, he was forced onto the grass and, unable to stop, skated back onto the racing line on the exit of Becketts where he collected Burns and Jordan.

Collard, who retains a slim shot at the title, was visibly winded after the clash but did walk away from his car.

Team Hard boss Tony Gilham said Burns had been transported to the medical centre and was likely to be airlifted to hospital.

After a lengthy clear up period, the safety car returned to the pits at the end of lap 19 in preparation for a race restart but, as Ingram raced away off the final corner and across the start/finish line, a red flag was shown.

Officials decided not to restart the race, with Ingram declared the winner as a result.

Goff had avoided any attack from the Ciceley Racing Mercedes of Adam Morgan before the appearance of the safety car, with Goff matching his best result of the season and Morgan claiming a fourth podium of 2017.

The top three had pulled a clear gap bak to the chasing pack during the green flag running, but Colin Turkington claimed a hard-earned fourth place to gain a couple of points back on rival Ash Sutton in the title fight.

Turkington started the race in eighth in his WSR BMW but had jumped up to fourth as the rain began to fall.

The Northern Irishman struggled for a couple of laps thereafter, dropping behind the AmD Tuning Audi of Ant Whorton-Eales and Dave Newsham (BTC Racing Chevrolet), but then came back past the pair to sit fourth before the safety car was called on lap 14.

Sutton, however, had bided his time in the pack and worked his way past the same pair to move into fifth before the field reached the safety car line.

Team BMR Subaru driver Sutton now has a 10-point lead over Turkington in the drivers’ standings.

Whorton-Eales still claimed his best result in the BTCC with sixth, ahead of Newsham, a charging Aiden Moffat (Laser Tools Racing Mercedes) and the Handy Motorsport Toyota Avensis of Rob Austin.

Mike Epps completed the top 10 in his Team Hard Volkswagen.