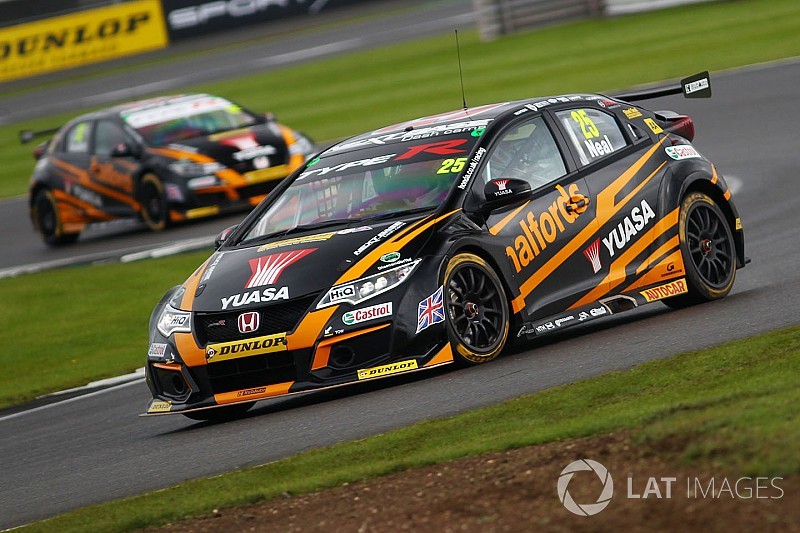 Matt Neal claimed his second BTCC victory of the season in a frenetic third race at Silverstone.

Neal started the race from 12th and only led five laps, but stole first place from long-time leader Rob Huff and eased home from there.

Power Maxed Vauxhall driver Huff got the jump on reverse-grid polesitter Dave Newsham off the line to snatch the lead into Copse and pulled out an initial gap before his lead was wiped out by a safety car that was called for an incident that accounted for championship challenger Colin Turkington.

WSR BMW man Turkington had been nestled in the midfield group, but was involved in an incident at Brooklands on the opening lap and dropped to 21st.

Things only got worse for Turkington, however, as his chances of recovering were all but ended a lap later as he was caught up in a clash.

Josh Cook and Jason Plato got together in front and, with the pack delayed, Turkington could not react quickly enough to avoid Stephen Jelley and slammed into the back of the Ford Focus.

Turkington recovered his BMW to the pits but, despite the ensuing safety car slowing the pack up, lost a lap and dropped to 25th in the order and could only recover to 22nd at the finish.

Huff got away well on the restart but Newsham was caught out by race one winner Tom Ingram, who slithered up the inside of the BTC Racing Chevrolet to grab second.

Speedworks Toyota driver Ingram then set about pressing Huff for the lead.

Things came to a head on lap 14 of the new 25-lap distance, with Huff easing Ingram out onto the grass after the Speedworks Motorsport driver got a better exit off Copse.

Ingram kept his foot in but Huff stuck to the inside line approaching Becketts, with Ingram forced to take to the grass before skating over the apex at the corner.

Huff was delayed but held onto the lead from Adam Morgan (Ciceley Racing Mercedes), while Ingram dropped behind Neal - who had picked his way through the order at the start - and Newsham.

Neal then dispatched Morgan on the Wellington Straight to move into second, and himself set about trying to prise the lead away from Huff.

The pressure finally told on lap 21 as Neal got a better exit off Copse and drew alongside Huff on the run to Maggotts.

Unwilling to take a similar risk to the one he took with Ingram, Huff gave Neal room and allowed the Honda driver through before Becketts.

Ingram and Austin recovered to finish fourth and fifth in their respective Toyotas, with Morgan sixth and the second BTC Racing Chevrolet of Chris Smiley seventh.

Andrew Jordan was eighth in his WSR BMW, while race two winner Jack Goff (Eurotech Honda) and the Motorbase Ford of Mat Jackson completed the top 10.

While the race was a disaster for Turkington, championship leader Ash Sutton produced a stellar display to advance from the back of the grid to finish 11th.

Team BMR driver Sutton had been sent to the back of the grid for a clash with Turkington in race two, but avoided the early incident and picked his way through the field thereafter to pick up five points.

He now has a 10-point lead in the drivers’ standings.