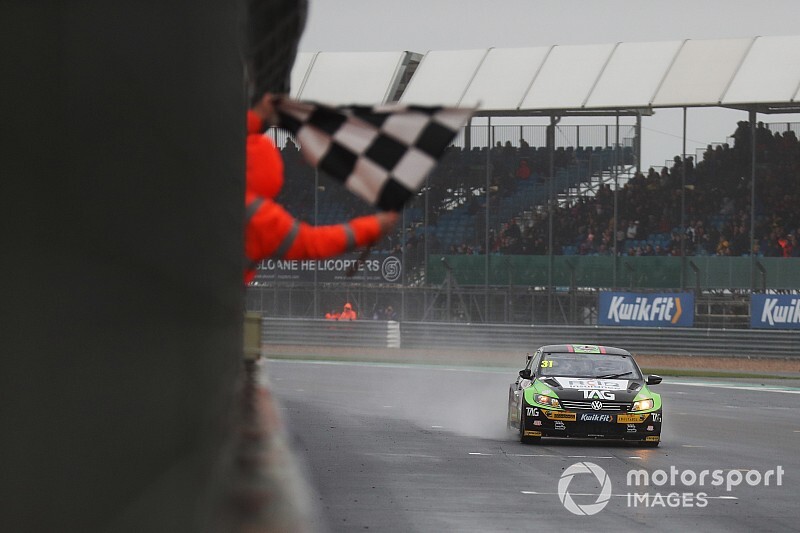 The Volkswagen driver, who only secured his place on the 2019 grid in a last-minute deal, romped to his fifth series triumph by 7.3s over Aidan Moffat, who in turn bagged the Infiniti's best ever result.

A late dash of rain on the green flag lap prompted Goff to gamble and pit for wet tyres for the race start, as Ashley Sutton – who was drawn on reversed grid pole – narrowly led into Copse.

But second-starting Matt Simpson took advantage of his Honda’s greater traction on corner exit to sweep by into Maggotts for the lead.

But a very poor exit on to the Wellington Straight gifted the place back to Sutton and dropped Simpson into the sights of Andrew Jordan.

Simpson ran across the nose of Jordan on the approach to Luffield and continued on to the grass and into retirement.

That forced a safety car to recover the stricken machine, which prompted much of the field to dive for wet tyres as Goff – then in 19th – posted the fastest lap of the race.

From the restart, Goff and Moffat made metronomic progress up the order until Moffat ran wide at Copse and lost the rear of his car on the slippery kerbs.

He saved the spin, but gave Goff – now ahead of early leader Cook – the breathing room to consolidate Team Hard’s maiden spoils.

Jason Plato was again in the wars, ending Adam Morgan’s race with a firm tap into Luffield.

That allowed a wet tyre-shod Turkington to climb to seventh after a door-banging three-lap battle with WSR teammate and championship rival Jordan.

Finishing ahead of his fellow BMW driver, and with Cammish – second in the points prior to the race – dropping back late on, it means Turkington leads the way on 297 points to Cammish on 281 and Jordan a further 11 behind ahead of the Brands Hatch season finale.

Goff’s teammate Michael Crees was a career-best ninth from the sister car of Bobby Thompson and Knockhill winner Jake Hill.

Cammish dropped to 12th at the flag, ahead of a best BTCC finish of 13th for ex-grand prix star Mark Blundell.

Behind MG driver Rob Smith was polesitter Ash Sutton, having fallen a lap down in the pitstop phase.

Race one and two winner Tom Ingram was hit by Ollie Jackson and suffered a puncture, dropping him to a point-less 22nd.

Matt Neal could retire from BTCC after 2020 season

Matt Neal could retire from BTCC after 2020 season