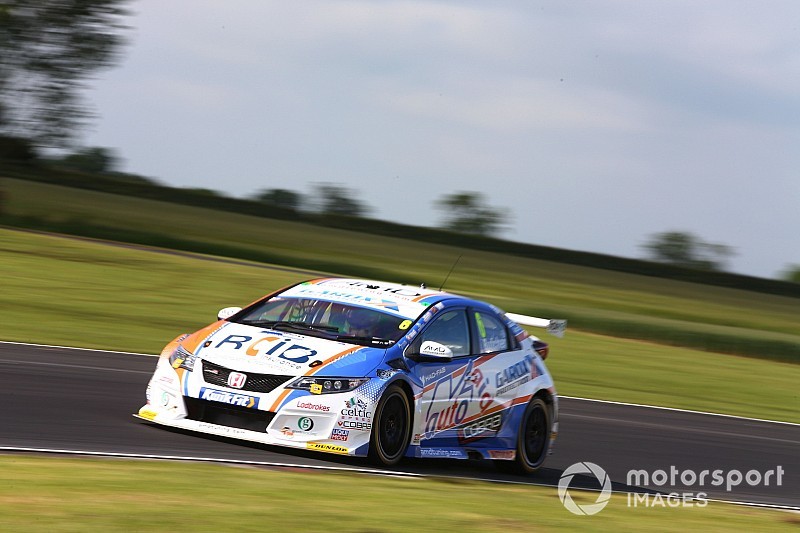 Rory Butcher prevailed for his second BTCC victory in the final race at Snetterton after a frantic battle between former teammates Ashley Sutton and Jason Plato.

The once Team BMR stablemates were side-by-side for much of the race in an incredible battle for the lead, but they came to blows with two laps to go, which sent Sutton spinning across the track and dropped Plato to an eventual fifth.

BTC Racing’s Chris Smiley was drawn on pole for the partially reversed grid, but Sutton in the rear-wheel-drive Subaru and on the softest compound rubber made a superior getaway from second.

The duo ran alongside each other into Turn 1, but Smiley braked later with Sutton on the outside.

That opened the door for third-starting Plato to dive into the lead in his Vauxhall.

As Sutton consolidated second place, he chased after Plato and was much faster through the corners but would lose ground each lap thanks to the Subarus straight-line deficits.

Plato held a 0.5s lead at the end of the opening lap, but continued to weave on the straights in an effort to heat his hard-compound tyres.

A lap-five run allowed Sutton to draw alongside through Oggies after a good exit from Hamilton, but Plato turned in early to nudge Sutton wide and allow Smiley back into second.

With 1s covering the top five, Sutton closed and repassed Smiley on the inside through Turn 3 and within two corners closed up to Plato again.

The pair were wheel-to-wheel across the line and Sutton braked later into the first corner to get the nose ahead into the Wilson Hairpin and pulled through for the lead after an excellent battle.

Plato then fought back with a nudge into the hairpin, which pitched Sutton wide and brought 12th-starting, soft-shod Butcher into contention.

With the AMD Tuning driver much stronger in a straight line, the three drew alongside one another into Brundle.

Butcher had the inside line to take the lead as Plato ran wide and clattered into Sutton, which put the Subaru over the sausage kerb and backwards onto the track.

It delayed Plato and put Butcher 2.3s to the good with only two laps remaining, and from there he was never caught despite the late pace of weekend-long struggler Josh Cook, who finished runner up despite lining up only 15th on the grid.

Andrew Jordan claimed some ground back to points leader Colin Turkington, thanks to a sixth-place finish ahead of Butcher’s teammate Sam Tordoff.

Race one winner Tom Ingram ended up eighth ahead of Ollie Jackson and Turkington.