Winter has not been kind this year for the usual pre-season testing for many series. The snow finally left the United Kingdom which allowed the British Touring Car Championship drivers and teams to take to the track.

Thankfully with the snow now past, several teams of the Dunlop MSA British Touring Car Championship have been able to press on with their 2013 preparations and at last get some track time at Brands Hatch, the place for the first race of the season that will occur in a little over two weeks.

The day was split into 3 one-hour sessions, which followed a 30-minute session first thing in the morning. The BTCC teams had to share a very overcrowded circuit with a wide variety of cars from a number of series. This meant that there was a mix of driver talents on display from various club-racing levels. As a result the red flag came out on an almost regular basis as the drivers struggled with the slippery conditions, meaning the teams were left frustrated at times and unable to string any real laps together. This was no more in evidence than at the start of the second session when the red flag came out 3 times in very quick succession.

Most eyes on the day were focused on the brand new eBay Motors West Surrey Racing prepared NGTC BMW 125i that appeared in full livery for the first time after its official launch the previous day. All 3 drivers, Rob Collard, Nick Foster and 2009 BTCC Champion Colin Turkington (returning to the series for the first time since taking the title), shared the driving duties in the flame spitting BMW. Each driver took part in a single hour session with Collard, who was driving the car for the first time, getting the extra 30-minutes in the morning. Following the test he admitted, “It’s a very positive start to the new season.” 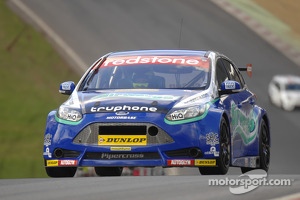 Local team, and one of eBay Motors main Independent rivals, Motorbase Performance were also in action with both of their stunning blue NGTC Airwaves Racing Ford Focus’ being driven by Mat Jackson and Aron Smith.

The team were also expected to run Liam Griffin in his S2000 Ford Focus, who will compete in the Jack Sears Trophy under a different name to Airwaves Racing, but his car left on a Motorbase flatbed prior to the start of the test for unknown reasons. Griffin might also be joined in the second team by a 3rd NGTC Focus with team boss Dave Bartrum admitting that they are close to completing a further car and, should the deal materialise, all four cars will be run by the Motorbase Performance team as a single operation but under two names.

Rob Austin Racing were also in action with a single car driven by a former single-seater ace, Will Bratt. He will compete in his first full season following a part season in 2012. Rob Austin Racing were able to announce at this year’s annual Autosport show in January that, following a successful one off sponsorship during the final round of the championship, Wix Filters will return to become title sponsor of both cars for the coming season. 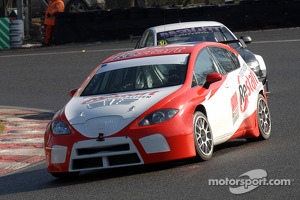 The car took part in a plain white livery with a black bumper and front end which clearly showed off the new body work at the front of the car, that the team have no doubt been working on over the winter. Although not at the wheel, fellow driver and team boss Rob Austin oversaw Bratt for the day and despite a couple of factors, declared the car had great promise for 2013. Austin said, “Great day testing! Will did plenty of trouble free laps and although it was so cold we couldn’t get heat in the tyres and it was a busy day, it would appear that our pace out of the box is pretty competitive.”

The final car on track was of BTCC newcomer Warren Scott, who will compete in an ex Special Tuning Racing S2000 Seat Leon in the Jack Sears Trophy. Very little is known of Scott and although no official announcement has been made, apart from him stating his intentions before Christmas to compete in the series, he looks set to run the car under his own team name of Team BMR Restart Racing having secured backing from the energy drink Restart. The car only took part in a single one hour session but appeared in a red and white livery, reminding many people of the Lukoil Seat that took part in last season’s World Touring Car Championship.

Ebay Motors show their colors for 2013