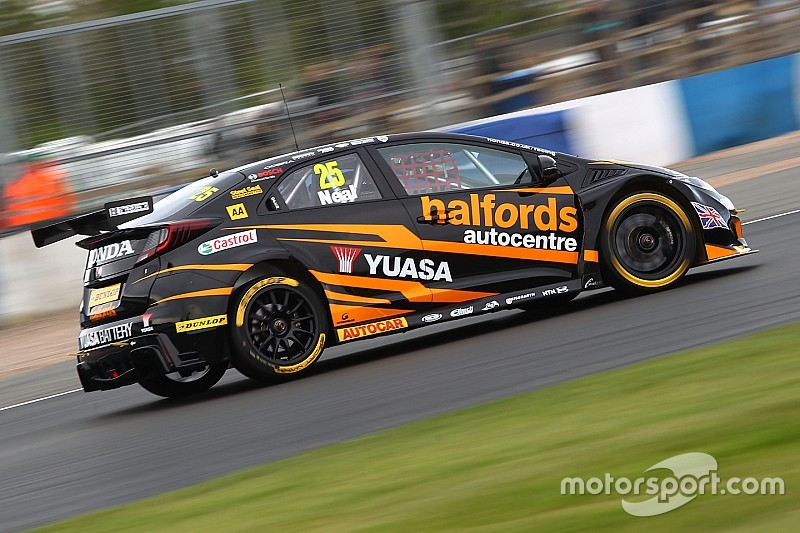 The Team Dynamics driver, who scored his last pole at Croft in 2012, led a Honda 1-2-3 from Shedden and Eurotech’s Jack Goff.

“I can’t remember my last pole,” said Neal. “This place has been good to Honda over the years.”

Andrew Jordan was the first driver to dip below 1m17s in his WSR BMW before teammate Colin Turkington lowered the benchmark to 1m16.662s.

But the rear-wheel-drive BMWs fell back as the quickest FWD got up to speed.

Shedden, championship leader Tom Ingram and Neal battled for top spot, with Ingram ahead after the first runs on 1m16.236s.

Shedden then broke the qualifying record (Ingram’s 1m16.161s from 2016) with 1m16.075s. On the following lap he got a tow from Chris Smiley’s Chevrolet and looked set to improve but got held up by the Chevy.

Ingram, running 75kg of success ballast, ended up as the best non-Honda in fourth with his Toyota. The Speedworks driver had struggled to find a balance in free practice and changed the set-up considerably ahead of qualifying.

Donington Park polesitter Rob Austin was fifth in his Handy Toyota, while Jeff Smith made it four Hondas in the top six with his Eurotech.

Tom Chilton was set to move the Vauxhall into the top 10 before Smith went off at Allard and brought out the red flags with five minutes to go.

Many drivers elected not to go for a time after the restart, but Chilton managed to improve to eighth, behind the Ciceley Mercedes of Adam Morgan.

Ash Sutton qualified ninth in his BMR Subaru and was top RWD car, despite having two times disallowed for track limits infringements. Teammate Jason Plato was 21st, 0.999 seconds off pole.

Turkington rounded out the top 10 and was best BMW, running 66kg of ballast.