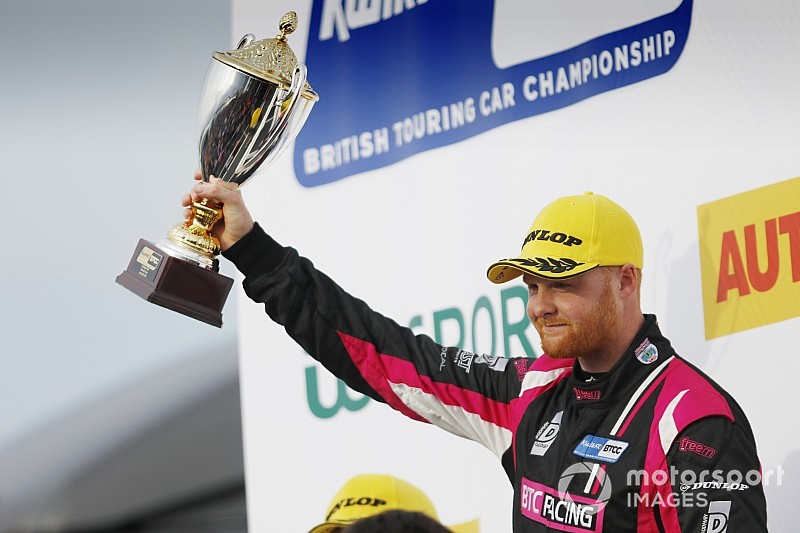 Light rain fell over the opening sector of the circuit as the cars set off on their green flag lap, and although Sutton’s initial launch was strong, he was overly cautious into Allard corner and that allowed Cook to carry momentum and overtake the Subaru Levorg into Campbell. Further back, Rob Collard tried to pass fifth-starting Butcher at the same point but spun and was collected by an unsighted Adam Morgan, which brought out the first safety car.

After a four-lap delay, Cook led a controlled restart as Sutton was hunted down by Butcher. The AmD Tuning driver, who scored his first ever BTCC win in the Brands Hatch finale, enjoyed a good exit out of Goodwood.

That combined with Sutton’s wide line allowed him through to second place, although the battle meant Cook was now half a second to the good. But his lead was eliminated after a recovering Collard jostled with the MG6 of Rob Smith, which spun the Excelr8 car into the path of Carl Boardley’s Volkswagen CC driver.

Another safety car was deployed, but Cook led away cleanly again as the race resumed, with Butcher and Sutton breaking away from Matt Neal in fourth. A resurgent Sutton left it until the last lap to line a move up on Butcher to retake second, but he ran wide on the exit of Church and that killed his run into the final chicane.

It left Butcher to finish runner-up to Cook, and combined with his fifth and seventh places in the earlier races climbed him to 102 points. Sutton was third ahead of Neal, Tom Ingram and Dan Cammish.

Oliphant finished as the highest ranked BMW in seventh, ahead of Jason Plato and Colin Turkington. A recovering Aidan Moffat completed the top 10 in his Mercedes A-Class, leading home Cook’s team-mate Chris Smiley.

Stephen Jelley had been closing on race one and two winner Andrew Jordan in a bid for a top 10 finish but the pair touched at Cobb. Jordan spun down to 17th, having earlier had to take to the grass to avoid Collard’s collision with Morgan.

Butcher’s team-mate Sam Tordoff suffered further issues, after an alternator problem denied him the opening race win, and he retired after six laps.