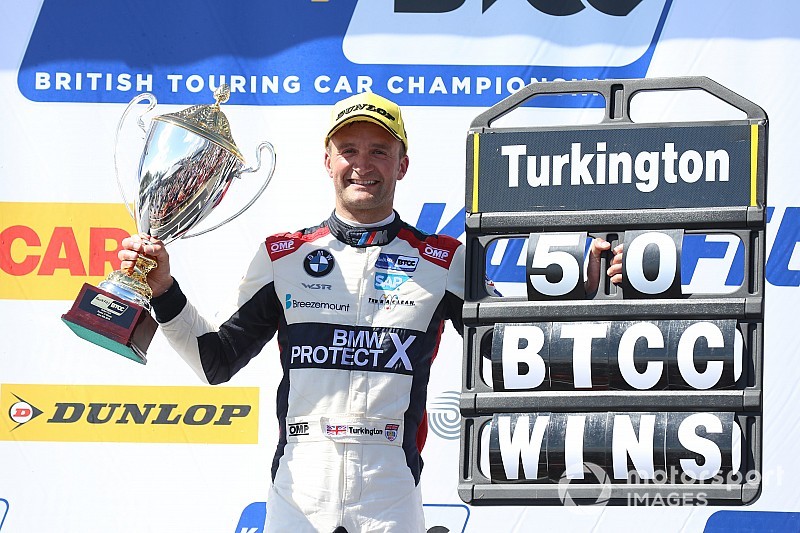 The reigning champion never faced a true challenge for first place as he led from pole and two safety car restarts to run onto the spoils 1.2 seconds clear of teammate Andrew Jordan.

The BMW 330i M Sport’s rear-wheel-drive traction off the line meant Turkington was clean away into Old Hall to consolidate first.

Jordan also felt the advantage and tore past second starting Dan Cammish to make it a WSR 1-2 early on but before he could cut into Turkington’s advantage a safety car was called.

Rob Collard braked too deep into the fast Cascades left-hander and knocked the Subaru of Ashley Sutton – who had a five-place grid penalty for his race one contact, which ended Adam Morgan’s run – backwards on to the grass.

Then under braking for the hairpin, BTC Racing’s Josh Cook ran into the rear of the Volkswagen of Jack Goff.

That sent Goff careering across the grass and he sideswiped Cook’s unsighted teammate Chris Smiley, with both retiring on the spot.

Turkington led the restart and started building up a margin over Jordan, which grew to 1.9s before another safety car was called when Sam Osborne clattered his MG into the barriers at Old Hall.

Following the brief interruption, Turkington ran onto victory by 1.3s over Jordan.

The third WSR car of Tom Oliphant was only 0.6s from making it a BMW podium lockout as he finished fourth behind Cammish.

Sam Tordoff fended off the ex-Turkington BMW 125i M Sport of a hard-charging Stephen Jelley by 0.14s.

Jelley made a flying start  from 10th and, along with Matt Neal, was there to capitalise when Ollie Jackson ran wide.

After a bizarre wheel failure in race one which dropped him to the back of the grid, Neal climbed up nine places to 20th on the opening lap and then continued to an eventual 11th ahead of Jake Hill – who was drawn on reversed grid pole for the finale.

Tom Ingram was on course for sixth, but the persistent rear balance problems of the Toyota meant he put a wheel on the grass on entry to Knickerbrook and ran wide, allowing seventh-placed Rory Butcher through.

But the end of the race was marred by an enormous shunt for the second MG of Rob Smith.

On the run to line he and the Volkswagen of Michael Crees tangled, with Smith spearing across into the tyre wall and he twice nearly rolled.

He exited the car himself and appeared unhurt, but the car was extensively damaged.