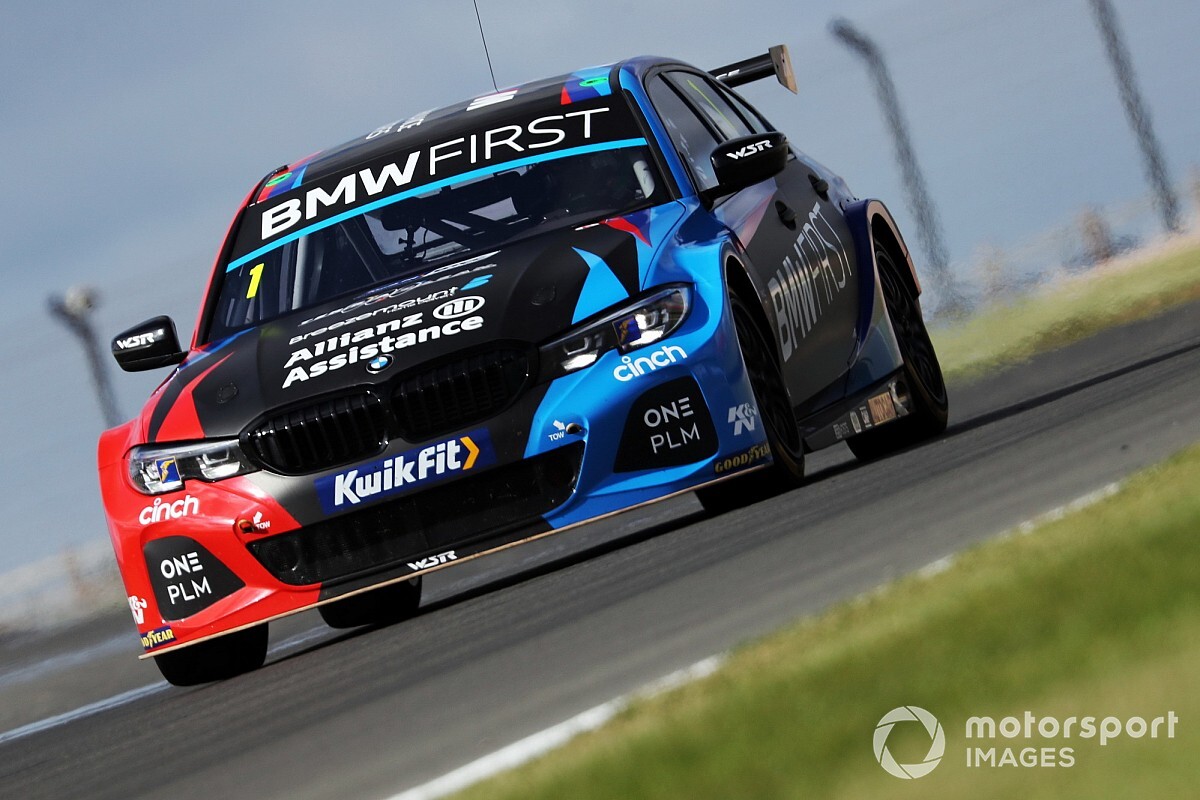 Reigning BTCC Colin Turkington was in a class of his own as he dominated the second race of the 2020 season opener at Donington Park.

Turkington launched his rear-wheel-drive BMW ahead of the Honda of first-race winner and pole-starter Dan Cammish into the first corner, and had built up a serene advantage of over three seconds by the ninth lap.

At this point, Nicolas Hamilton dropped his tail-ending Volkswagen into the gravel at Coppice, and for the second time of the day caused a safety car.

Over the remaining seven laps of green-flag running to the finish, Turkington extended his advantage again and the West Surrey Racing-run BMW finished 2.199s to the good.

With his Team Dynamics-run Honda now laden with 60kg of success ballast following his opening-race victory, Cammish was really struggling in this race.

On the fourth lap, Cammish ran a little wide at Coppice and was powerless to prevent Rory Butcher inserting his Motorbase Performance Ford into second place at the chicane.

One lap further on, and Cammish was down to fifth, with Tom Ingram’s Speedworks Motorsport-run Toyota and the second BMW of Tom Oliphant also passing him.

Cammish appeared safe in fifth, with teammate Matt Neal shadowing him but appearing to happy to sit there, but the safety car hampered the Hondas and played into the hands of Ash Sutton, who had fought his Laser Tools Racing Infiniti through from 14th on the grid (following his first-race incident) to eighth by the time the race was neutralised.

Sutton, his Infiniti already with loose trim from battle scars earlier in the race, shouldered his way past Stephen Jelley’s Team Parker Racing BMW after the restart in a battle that also involved the BTC Racing Honda of Tom Chilton.

He then hunted down the Hondas, passing Neal into the chicane with three laps remaining, then getting Cammish at Coppice on the following lap.

Up ahead, Oliphant passed Ingram for third at Coppice on the penultimate lap, and Butcher was only just ahead of both of them.

Sutton threw everything into catching the second-place battle and, while Butcher took his second podium of the day and Oliphant his first, Sutton almost drew abreast of Ingram as they crossed the line.

Behind Cammish and Neal, Adam Morgan was right with them by the end in the Ciceley Mercedes, while Jelley and Josh Cook (BTC Honda) completed the top 10.

It was a bad race for the MB Motorsport Hondas. Jake Hill started from the pitlane following an engine change due to his first-race retirement, but he retired again, while teammate Sam Osborne had fallen by the wayside one lap earlier after running in the top 10 in the early stages.