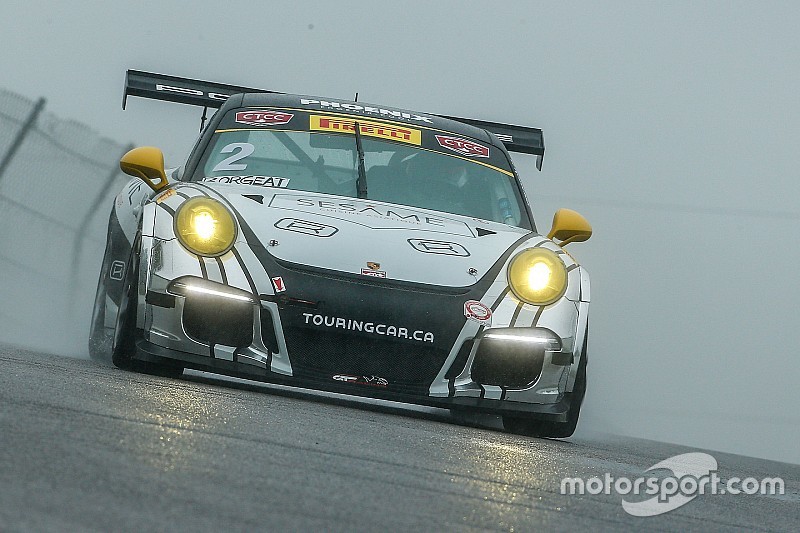 Étienne Borgeat won the opening round of the 2018 CTCC at Canadian Tire Motorsport Park on Saturday.

The race started in the rain with Borgeat leading the pack. However, Gary Kwok (Honda Civic TCR) quickly moved into the lead ahead of Borgeat. After a few laps, fog came in, making the condition even more difficult for the drivers.

One lap later, race officials called a full-course yellow. The race restarted after one lap under the yellow.

Gary Kwok was still in the lead but Tom Kwok moved into second place in the sister Civic. Borgeat was third in front of Sharpe. Meanwhile, Fellows led the Super class while Little was first in Touring.

The top three cars circulated nose to tail around the road course,  but a few laps later Borgeat retook second place. And on Lap 14, Borgeat was first and leading the pack. Marlin Langeveldt (Mazda MX5 Cup) was now first in the Touring class.

Borgeat put the hammer down and lapped the track a full second and a half quicker than the two Kwoks. However, Borgeat refused to take unnecessary risks on the slippery tarmac and slowed down his pace a bit, allowing the Kwoks to make contact. Damon Sharp was still in fourth place, 21 seconds down to the leading pack.

The race ended on Lap 19 with Borgeat claiming overall victory and GT Cup victory, 2.0” ahead of Gary Kwok (first in GT Sport) and 3.1” in front of Tom Kwok. Damon Sharp took fourth place ahead of Simioni and Edward Killeen. Sam Fellows captured victory in the Super class and Shawn Little taking honors in the Touring category.