CTCC - Guérin and Daniel win a race each at CTMP 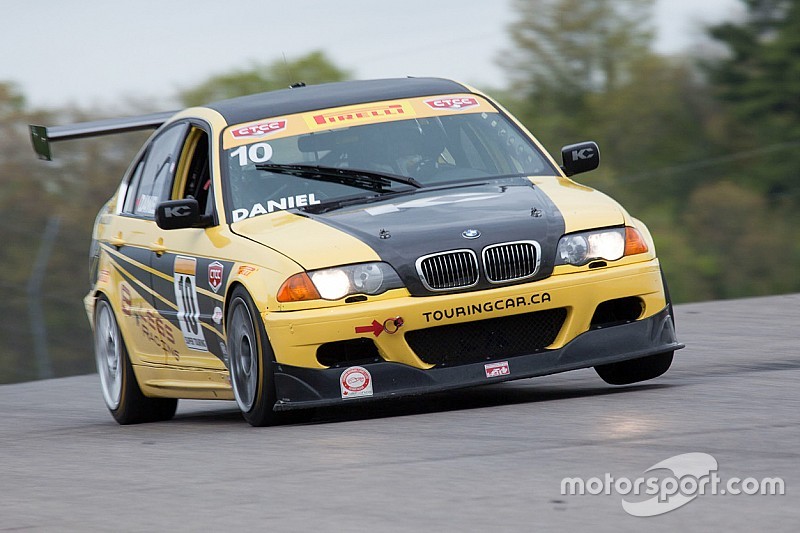 The first two races of the 2017 season of the Canadian Touring Car Championship were held at Canadian Tire Motorsport Park in Ontario this past weekend.

Eric Hochgeschurz (BMW) got the pole in the Super Touring class while Michel Sallenbach put his MINI Coupe JSC on pole in the Touring category.

The 40-minute race got underway with Guérin out of the box in first place with Attrell and Sahakian in hot pursuit. Hochgeschurz led the field in Super Touring while Sallenbach was in command of the Touring class.

On Lap 10, Guérin was clearly away from Attrell, and Sahakian was still third, some 17 seconds down to the flying leader. However, Attrell hit trouble and got passed by Sahakian. Attrett then pitted as a broken dipstick allowed oil to spray out of the motor and onto his windshield, necessitating an extended pit stop.

A full course caution bunched up the field on Lap 20. Guérin was then first ahead of Sahakian and Damon Sharp in a Toyota GT86.

The restart took place with just five minutes and thirty seconds to go. Guérin again powered in front of his rivals in his Ferrari. In the Super Touring class, Jerimy Daniel moved into first place in his BMW 330i, and a tight battle for third place developed between Tom Kwok (Honda Civic) and Sharpe.

Guérin crossed the line in first place, winning the race from Sahakian who made it to second on the ultimate lap, and Kwok. Daniel was first in the Super Touring class while Sallenbach won in the Touring category.

Torrential rain just prior to the start of Sunday’s weekend finale put the race in doubt, but the weather improved slightly just before the green.

With Guerin not running this round, it left the door open for Bob Attrell to secure the GT Sport pole, a feat matched by Jerimy Daniel in Super Touring and Sallenbach in the Touring.

Under full wet track conditions, Attrell quickly powered into the race lead, but almost as quickly, ducked into the pits as oil covered the windshield again.

Gary Kwok took over the lead of the race, however his position only lasted for one lap as Jerimy Daniel soon appeared at the front of the field. Daniel opened up a safe advantage and the managed his position, taking the overall race win and topping the Super Touring scoring sheets.

Despite falling off the pace of the race leader, Kwok maintained a strong presence and came to the checkered flag at the front of the GT Sport pack. Attrell, having carved his way back through the entire field, snuck around newcomer Nathan Blok, a former open wheel racer, on the final lap to cross the line in third spot overall and in the runner-up position in GT Sport.

Michel Sallenbach appeared to be in cruise mode as he accepted his second Touring class race victory of the meeting, but the Quebec driver admitted that it was not as easy a drive as the engine temperature of his MINI went through the roof during the race, forcing him to slow down. Sallenbach explained that his crew had taped up the radiator inlet to improve the handling, but it appears there was too much tape...

Scott Nicol, dealing with new car teething issues with the just-completed No. 41 Velocity Motorsports Honda Civic, was able to reward his Honda Canada crewmates with a runner-up Touring class trophy in the race.