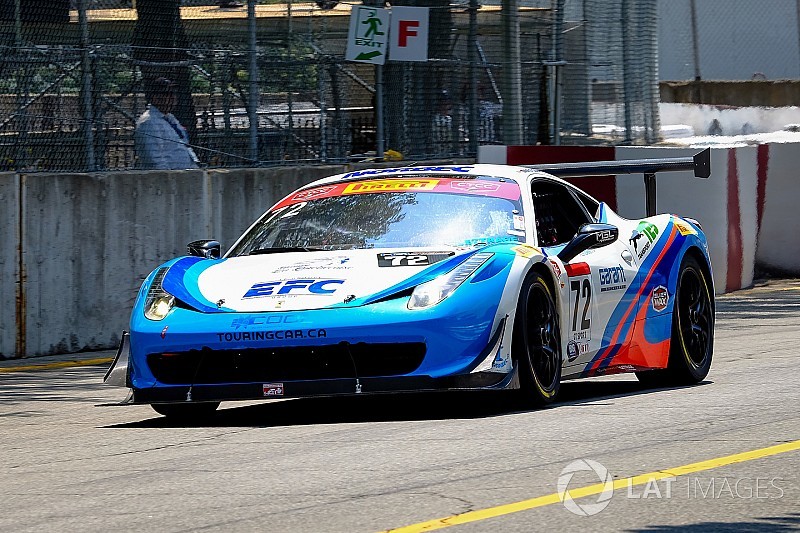 A full-course yellow was required near the end of the race after Sylvain Laporte had a big crash in his MINI. The car was badly damaged, and the race ended under the yellow flag.

Race two started on a wet pavement. Guérin quickly pulled away from Tom Kwok (Honda Civic) and Chris Sahakian. Despite the treacherous conditions, the leading Ferrari was literally flying. After nine laps, Guérin had a 16-second lead over his pursuers. Jeff Kingsley was first in Super class and Sallenbach was leading the Touring category.

Unfortunately, Gélinas was forced to pit for repairs, allowing Hevey to move into third. Dr. Jocelyn Hébert was now into fifth place overall in his Acura TLX. A very good battle for third developed between Hevey and Kingsley.

The race ended on Lap 24, with Guérin winning his second race of the meeting. Chris Sahakian was the runnerup, 43 seconds down. Hevey was third overall, and first in the Super class. Michel Sallenbach won the Touring category.

Two separate incidents happened at the start of the third race of the meeting, forcing the officials to send the Safety Car in action. At the restart, Guérin powered away from the rest of the pack in his Ferrari. Tom Kwok was second ahead of Lee Chaplin (Ford Mustang) and Chris Sahakian.

A bit down the field, Eric Hochgeschurz led the Sport class and Sallenbach was first in the Touring category.

On Lap 10, Chaplin’s Mustang suddenly began to slow down, the victim of an electrical problem. Sahakian moved into second place ahead of Bob Attrell in a Hyundai Genesis Coupe.

With ten minutes to go, Crystel Charest planted her MINI in the tire wall at the end of the main straightaway. The incident needed the presence of the Safety Car. The race was eventually restarted on Lap 20 for a one-lap-dash.