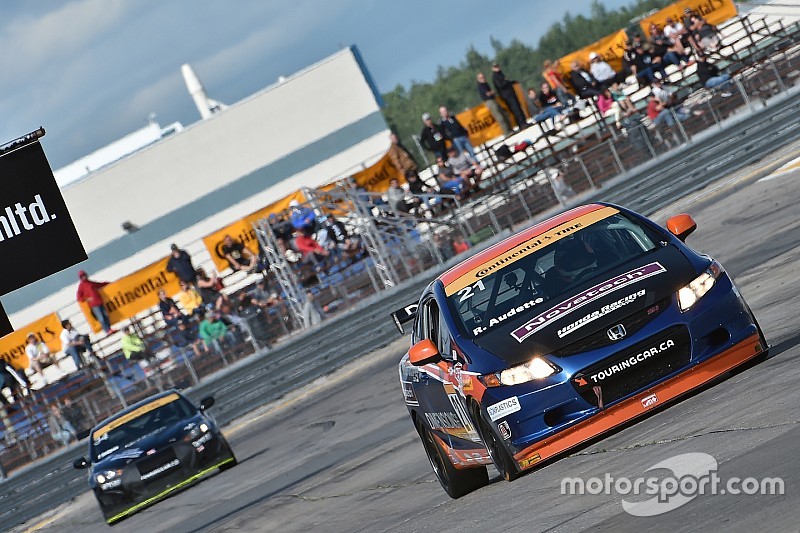 It was a weekend of hard and close racing for CTCC presented by Continental Tire drivers at the ICAR event in Mirabel, Québec this past weekend with tight battles and drama, both on and off track.

The first race of the weekend (Round 5) saw a clean start on the tight Mirabel course, with drivers going 2 and 3 car-wide into turn one. Karl Wittmer, in the Lombardi Honda Civic Si No. 91 had a poor start, dropping a couple of positions on the front straight but those behind were able to avoid him. The field quickly settled into a pace that would see close nose-to-tail racing for many positions throughout the grid during the 40-minute race. With no cautions, drivers had to work hard and apply pressure for any position gain on the track.

While Super Touring and Touring classes were hotly contested, the Grand Touring competitors had a less hotly contested run. In the end, Ben Distaulo, in his first race of the season, would take his Lombardi Honda Civic Si No. 6 to victory even after losing second gear!

M&S Racing’s Gary Kwok followed a distant second in the Mitsubishi Evo No. 66 and second-year driver, Chris Sahakian secured another podium in his Ford Mustang No. 99 for United Auto Racing.

Remy Audette in his Honda Civic Si No. 21 would capitalize on his pole position and convert it into a win in Super Touring with a relatively easy class and overall victory. Behind him, ST championship leaders Scott Nicol in the Velocity Motorsports Club Honda Civic Si No. 41 and Eric Hochgeschurz in the 8 Legs Racing BMW 330i No. 11, had a wheel to wheel, and a little paint to paint, battle throughout the race, with Eric coming out on top for second place.

In Touring, Team Octane’s Michel Sallenbach in his MINI Coupe No. 46 took victory after battling Paul Dargis in his Dargis Motorsport Honda Civic Si No. 35 by barley a second. Sallenbach started on pole but was quickly paced by Dargis and the two pulled away. After a few laps, Dargis had a slight issue on track, and Sallenbach was able to scoot by for the lead.

Happy driver of the day goes to Christian Raymond who had a bad accident in testing at ICAR in 2015, and at CTMP in May, returned to take his FUELD Motrosports Honda Civic Si No. 4 to a well-deserved third place. Mac Korince who was in the battle fell out of contention when he shredded a fan belt, but continued after repairs to score points. A tough weekend for Korince as they had a trailer tire go flat on the way to the track and lost their paddock canopy in Friday evenings deluge.

Sunday brought sunny skies and much warmer weather. Team coats gave way to team short-sleeve shirts and the search for shade, although the constant wind at ICAR kept everyone in check.

Race 2 (Round 6) was quite a bit more eventful with two caution periods. Scott Nicol would get the jump on Audette at the start, taking the lead at the beginning of the race. Scott led for a number of laps before Remy closed in and executed a picture-perfect pass to take the lead. Hochgeschurz and Nichol again put on a fight through much of the race, with Distaulo getting a front-row view as he gave chase (still without second gear).

Grand Touring class contenders Damon Sharpe (GT points leader after Round 4) and teammate Bob Attrell would suffer suspension failure in the same lap with only one of the two Hyundai Genesis Coupes able to make it back to pit lane. The failure was caused by a design flaw in an outsourced part and set the team back significantly in the points.

While Attrell was having it relatively easy in GT, with challenger Gary Kwok suffering mechanical issues and Sahakian a distant but steady second, touring was much different. The start saw Dargis spin in 2 with Michel going wide to avoid dropping them back. Christian Raymond and M&S Racing’s Honda Civic Si them put on a nose to tail battle. Michel Sallenbach and Paul Dargis both began to work their way back up the field with Michel moving to third a few short laps later. Touring title contender Mac Korince was again bitten by bad luck with a retirement due to clutch failure.

The first caution of the race came when Paul Gravel had a big incident by himself, which resulted in significant damage to the car. While Gravel was cleared and released by medical, his car suffered significant damage and the team is working to put together a car for the next round.

On the restart, Audette got a fantastic jump on the field and was working to widen that gap when the final caution of the race came out after Jon Young became the victim of contact between Paul Dargis and Christian Raymond. The race ended under caution with Audette taking the victory in Super Touring and overall, Distaulo winning in Grand Touring, and Dargis surviving the contact to win in Touring.

With the weekend's results, the championship points battle changes in Grand Touring with Sahakian taking the points lead and Damon dropping to third. In Super Touring, Hochgeschurz continues to lead Nichol, with Karl Wittmer moving into third. Sallenbach the weekend to solidify his lead in the Touring class championship standings, but Mac and Gravels’ misfortunes aids Jon Young and Nelson Chan’s move up.

The next event on July 16th and 17th at Shannonville Motorsport Park will have several competitors playing catch-up in an effort to recover from the ICAR experience.