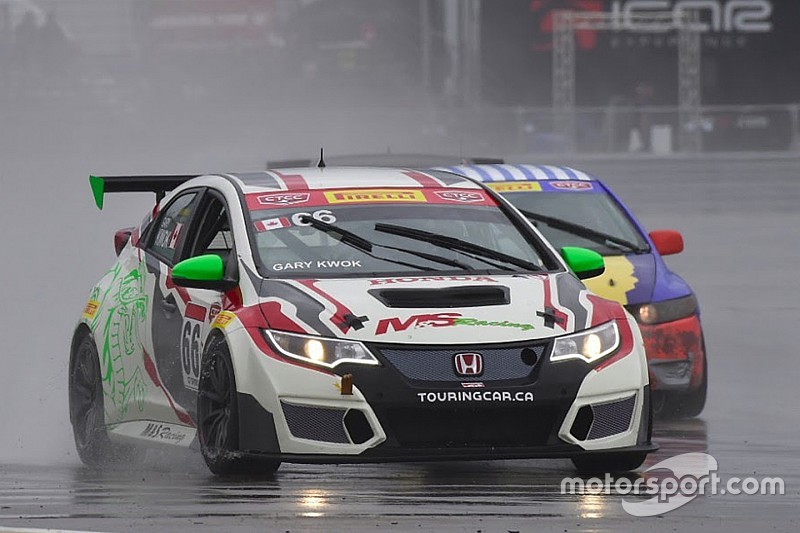 The last two, 40-minute rounds of the Canadian Touring Car Championship were held on the airport circuit of ICAR Mirabel this past Saturday.

A violent morning thunderstorm forced the competitors to switch to rain tires for the opening race. The damp track conditions proved to be somewhat of a handicap for the powerful GT Sport class cars with pole sitter Chris Sahakian’s No. 99 United Auto Racing Mustang being a perfect example.

While Sahakian faded slightly, the battle for the overall race lead raged between Super Touring class racers Jean-Francois Hevey (No. 12 Porsche) and the No. 11 8Legs Racing BMW of Eric Hochgeschurz.

On Lap 8, Chris Sahakian’ sister Ashley (No. 7 Mustang) impacted the wall, the force sufficient to dislodge the concrete barriers. Ashely was fortunately not injured. The red flag was produced to allow for the wall to be repaired and replaced, but once again under green, the intense two-car battle for the lead resumed.

Series’ newcomer Jeff Kingsley, who started from the tail end of the field, drove his No. 16 SCB Racing BMW into the top three before taking advantage of some ‘aggressive racing’ from Hevey and Hochgeschurz that opened a gap for him to squirt through to assume top spot, a position that the Pickering, Ontario resident would maintain to the chequered flag shown on Lap 25.

It was the debut Super Touring class, and overall victory for Kingsley. “I was late to the grid so I had to start from the back,” Kingsley said. “I was thinking ‘end goal’, which is the championship, and I knew I needed to get towards the front. I’ve had podium finishes before, but you get more points for a win. That kind of inspired me.”

Chris Sahakian stayed in contact with the race-leading trio to claim fourth place overall and tops on the GT Sport class.

Paul Dargis made his first CTCC start of the 2017 campaign aboard a new No. 35 Honda Civic and used his wet-weather skills to earn the Touring class victory, crossing the stripe in fifth spot overall.

Saturday afternoon’s second race was run under almost perfect conditions, and the expected running order was reconfirmed as Gary Kwok (No. 66 M&S Racing Civic TCR) passed Sahakian and the No. 88 Hyundai Racing Canada Genesis of Bob Attrell to the chequered flag to score the GT Sport class win with an advantage of 3.447 seconds over Sahakian at the end.

After having his four-race winning streak halted in Race 1, defending Touring class champion Michel Sallenbach (No. 46 MINI Coupe) rebounded to capture the class win, finishing in fourth place overall and the final car on the lead lap. Dargis held on for a second place result, crossing the stripe five seconds in front of Nelson Chan in the Octane Racing No. 45 MINI.

For a mixture of mechanical reasons, the front-runners in the Super Touring class were all forced to make unscheduled pit stops. Recovering the best was Eric Hochgeschurz who soldiered on to take the class win. Although several laps down, Nathalie Henault (No. 20 Quickseries Subaru) was on-track to receive the chequered flag and was rewarded for her persistence with a career-best second place result. Race 1 winner, Jeff Kingsley finished the race eight laps down from Hochgeschurz, but was still running at the end to score a podium result.

CTCC - Guérin and Daniel win a race each at CTMP