In the WRC, rally masters like Sebastien Loeb, Mikko Hirvonen and Petter Solberg take their DS3s and Fiestas into some pretty amazing and spectacular angles… but they are not exactly behind the wheel of machines men love and dream about driving. There are probably very few who remember the glory days of Group B and who doesn’t miss those incredible beasts, but sadly it was impossible to contain those 600bhp monsters on the tight and twisty roads of the WRC. But whereas the FIA governing body tried to get us interested in Group A underpowered, production based cars the legendary prototypes weren’t retired and forgotten… no… they were unleashed in a new environment; that of rally-raid and the Dakar. To this day the descendents of Group B, spaceframe chassis, silhouette bodies, twin turbos or 7 litre V8s, race together in a tragically under-promoted series called the FIA World Cup for Cross Country Rallies.

Manufacture support in this extreme championship should shame the WRC with BMW, Nissan, Toyota, Mitsubishi, Mercedes, Isuzu and Opel represented as well as a host of pure prototypes such as the Schlesser buggy and the Russian G-Force Proto.

Russians are fast becoming to rally-raid what Finns are to rallying and it was two-time Baja World Cup Champion Boris Gadasin who took a convincing win in the flooded valleys of Italy. The only stages he didn’t win were those where he was controlling the gap to 2nd placed fellow Russian Leonid Novitsky in his X-Raid BMW X3CC. Gadasin was driving one of the most stunning vehicles in the championship, his self-built G-Force Proto, and the sound the 7 litre V8 Chevrolet Corvette engine made as it echoed off the trees was pure beauty! 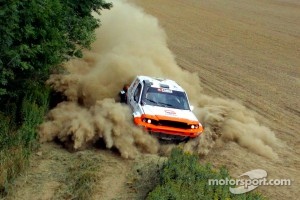 Gadasin is a true racer, never happy with second place, and when behind the wheel is always out to test his limits. However the 5 or 6 day desert Cross Country events are a lot different to 2 day Bajas and his first experience of the Abu Dhabi Desert Challenge lasted just 4km before he missed a dip in the road and barrel-rolled through the sand. The G-Forces are tough cars though and despite another big roll later on he still made it to the finish.

At the top of the leaderboard though it was a fantastic battle between two old masters Stephane Peterhansel in the stunning new X-Raid MINI ALL4, Jean-Louis Schlesser in his equally beautiful buggy and last year’s champion Novitsky, a man his rivals ruefully accept has now come into his own as a desert driving expert. Driving competitively over endless dunes tales many years to master and doing it in 46 degrees of heat is something that only the best of the best can do. Schlesser said, "For me the Desert Challenge is even harder that the Dakar because although it is not so long it's so hot and also every stage is just so constantly technical!"

Peterhansel looked to have the legs on his team mate but got caught in a sand bowl and it was only thanks to the sportsmanship of Novitsky who stopped to tow him out that allowed him to continue, but the next day he showed why he doesn’t have a total of 9 Dakar wins to his name by accident. Over the monster 350km stage he was an incredible 20 minutes faster than anyone else. An exhausted Novitsky was understandably disconsolate, but he knew that if he’d just driven past, the victory would have been hollow. But after 6 days and a total of 20 hours behind the wheel Novitsky was only some 15 minutes behind with Schlesser a further 45 minutes back in 3rd, his buggy not well suited to the technical stages.

This event was also notable for several heroic performances… On his first ever international event Roman Briskindov in the 2nd G-Force was an unbelievable 4th after the first stage… But the dunes are hard to master and after misjudging one he landed so heavily that he cracked his tailbone and had to be evacuated by helicopter. Also impressive in his Predator buggy’s first outing was Mark Powell who got 2nd in class behind Schlesser despite his buggy’s best efforts to immolate itself. 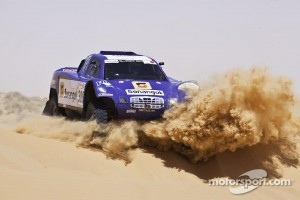 And then it was off to Tunisia. Understandably due to the severe unrest in the region the entry list was greatly reduced, but Russians aren’t too bothered about social upheaval and Schlesser knows the desert well enough to judge if it is dangerous, and so commenced one of the greatest battles of the year… far away from the press who dare didn’t venture out! All apart from the intrepid photographer Marian Chytka! The stages were all over 200km long, some nearly 300km, but the veteran legend and the newly ascended champion sparred together in the sand, parrying timesheet blows always just within minutes of each other. Going into the penultimate stage Schlesser was just a little over a minute behind with nearly 500km to go, the slenderest of margins. But in the end it was not driver heroics or mastery of the terrain that set the outcome, it came down to a technical issue with Schlesser's buggy as alternator failure slowed him sufficiently to let the Russian off into an unassailable lead.

The 28th edition of the Baja Aragon was the next event on the calendar. Many of his rivals were taking part on the Silk Way Rally in Russia but Novitsky was hoping to bag some easy points the dusty, rocky tracks of central Spain provided a bit of a shock as the locals comprehensively out drove him. Filipe Campos usually races with a much smaller restrictor in his native Portugal, so felt like his YSER team BMW X3 had its balls back. It was his first victory in Spain in 17 attempts!

For the championship leader it seemed that 3rd was the best Novitsky could manage, but a series of three punctures... rally-raid cars only carry two spares... dropped him all the way back to 7th.... Faring even worse on the tight tracks that his buggy was ill suited to was Schlesser who managed just a single point for a hard fought 10th.

Novitsky though, showed his class and turned the tables when the championship arrived in Hungary, although he did have one distinct advantage; he was the only one who could see where he was going! As championship leader he was first off into the Super Special near Gyor and had a perfectly clear view whereas following two minutes behind Gadasin was driving absolutely blind through the dust in places. Some teams were joking about doing rain dances in the service park car park but unfortunately the next day dawned bright and still and the dust lingering in the trees meant that no one behind could really push. Czech driver Miroslav Zapletal was in an X-Raid supported BMW X3CC and there was a great battle between him, the local star Balazs Szalay in his hulking Opel Antara and Romania’s Costel Casuneanu in a Mitsubishi MPR13. On the final day X-Raid’s rivals were granted their wishes as not only a breeze or a wind whipped up to blow away Novitsky’s dust, but a full-on gale! Gadasin went on full attack but was hampered by the dust trail of a slowing Zapletal and had to settle for second. 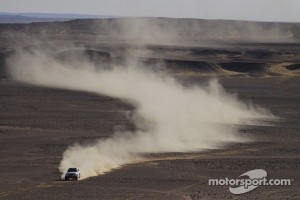 The deathly wastelands of central Egypt were the battle grounds for the penultimate round and straight away there was a shock. Gadasin coaches his team mates and he trains them well... as new G-Force driver Vladimir Vasiliev added Stage One of the Pharoans Rally to his tally to go with a stage of the Silk Way Rally and the Hungarian Baja. Novitsky was away in a huge testing program for the Dakar so Schlesser was here for only one thing; victory. He might have told people he was only interested in the 2wd trophy, but he wasn’t fooling anyone, he was aiming straight for the overall championship. The carnage that took out a good portion of the rest of the field meant that once the wheels fell off Vasiliev’s challenge the ‘Master’ never lost a stage again... and Ukraine’s Vadym Nesterchuk trundled in to a totally unexpected 2nd. An amazing performance by Japanese driver Jun Mitsuhashi who was holding 2nd place in his T2 (standard specification) Toyota Land Cruiser came to nothing with an alternator bracket failure on the last stage and Boris, performing more acrobatics than fast stage times brought his seemingly indestructible G-Force Proto home in third, cementing third overall in the championship.

The season finale was in Portugal and the incredibly popular Portalegre 500 was celebrating its 25th birthday with a massive field of 62 cars lined up for the start. Schlesser, still in with a chance at the title if Novitsky failed to score turned up in a Mitsubishi L200 as four-wheel drive was the only way he could hope to compete in the muddy forests… but unfamiliarity with the car coupled to severely misting up windows hampered his performance… while for Novistsky, driving the MINI he will use on the Dakar, it was all going to plan, leading after the first 172km stage, 19 seconds ahead of Gadasin. In the second of the MINI, Portugal’s Filipe Campos lost over 8 minutes with two punctures, so surely he had no chance… But if you drive to absolute perfection and push on every single metre over a 253km stage anything is possible and he took the MINI a sensational win, and the MINI’s second victory of 2011.

On the last stage Novitsky, knowing that Schlesser was having difficulties, backed off to preserve the car and Gadasin, flat out as usual, bent something in the steering which made it quite a handful on the tight and twisty Portuguese tracks. They came in 5thand 6th respectively.

Campos was understandably delighted, but with a successful defence of his 2010 crown Russia’s Leonid Novitsky is 2011’s rally-raid master and now heads off to the Dakar full of confidence!

The 2012 season has a full calendar with three new events entering the series, the Qatar Baja, Baja Poland and the Estoril - Marrakesh, but starting off the year will be the White Hills Russian Baja in February, a candidate event for 2012 and the only one to take place on ice and snow. Join us there! 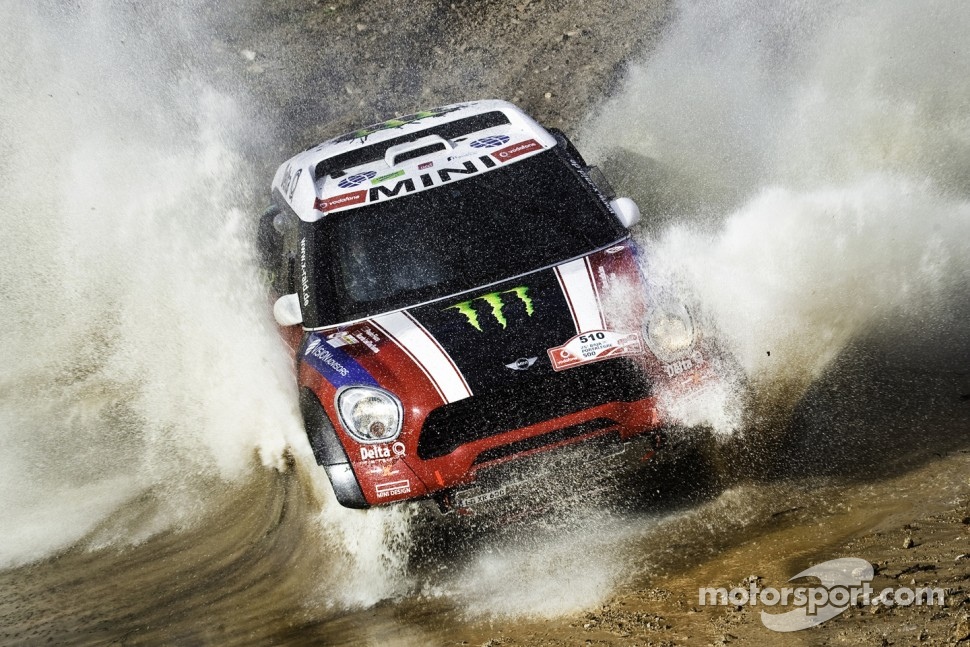 No change to Spielberg Turn 2 after horror MotoGP crash