Mirror, mirror on the wall, which is the toughest rally raid of them all? Many reflective bathroom pieces would hasten to reply, “Why, the Dakar of course,” but there are a few in FIA offices, race team workshops and UAE hotel rooms that would say something different... Dakar takes intrepid teams across some of the most amazing landscapes in the world but there is a strong element of expedition and adventure... In the Abu Dhabi Desert Challenge there isn't.

Held in spring where the temperatures hover around 40C degrees in one of the remotest place on earth, it is a sandy celebration of motorsport brutality and the organisers are proud with the label they've earned; 'Tougher than the Dakar'. Each year they go to great lengths to make it harder than ever, and as the half the field that didn't make it through the first stage will testify, this year they did well. A good example of just how hard it was, 2-time world Baja champion Boris Gadasin in his G-Force Proto had a very small fault, the gas was leaking from the air conditioning through a tiny hole, yet it caused retirement... from heatstroke! “Try taking an exercise bike into the sauna and riding it with your clothes on!” explained team manager Marina Kosenkova. 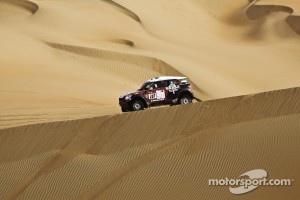 The man they call the Desert Fox, Jean-Louis Schlesser, left the first stage carnage well behind and immediately took a 30 minute lead in his self-built buggy, enough time to be able to just shadow his competitors. Cruising through a 1580km event is of course nothing you can assume but if there's one man you'd put money on in a desert race it would be the 2-time Dakar winner. The eternally optimistic Khalifa Al Mutaiwei in his stunning X-Raid MINI ALL4 didn't seem overly concerned at the time deficit though and won the next two stages... but only chipped off a few minutes of Schlesser's lead. Local knowledge was no match to decades of experience, and the killer 317km long Stage 4 saw the end of his challenge when he lost over 20 minutes digging himself out of the sand. Second place was secure though as Patrick Sireyjol in his SMS Buggy had his own problems, the 12 time Dakar entrant also struggling in the very soft sand.

Behind the top guys was local driver Yahya Bel Helei who has entered every one of the 22 Desert Challenges in his T2 Nissan Patrol. “The Liwa desert is a very difficult place to race, and only competitors who have taken part in the Desert Challenge can fully understand this!” 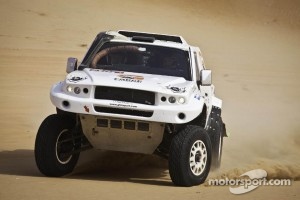 The final stage was a 287km blast from the Liwa dunes near the border of Saudi Arabia back to Abu Dhabi and the fast, not so technical tracks allowed G-Force's Vladimir Vasiliev to show his promise with the second fastest time, but the winner, with a time of 21 hours and 39 minutes was the esteemed Mr Schlesser, who also takes over at the top of the championship with Al Mutaiwei in second.

"The desert offered treacherous soft sand which need to tame to ensure a good performance. It took a drive very fast without breaking anything. A race is never won before crossing the finish lane" said Jean Louis Schlesser.

The teams don't have too far to go from Abu Dhabi for the next round, the Sealine Rally Qatar from 18th to 21st April where local driver Nasser Al-Attiyah will be behind the wheel of an Overdrive Toyota Hi-Lux.