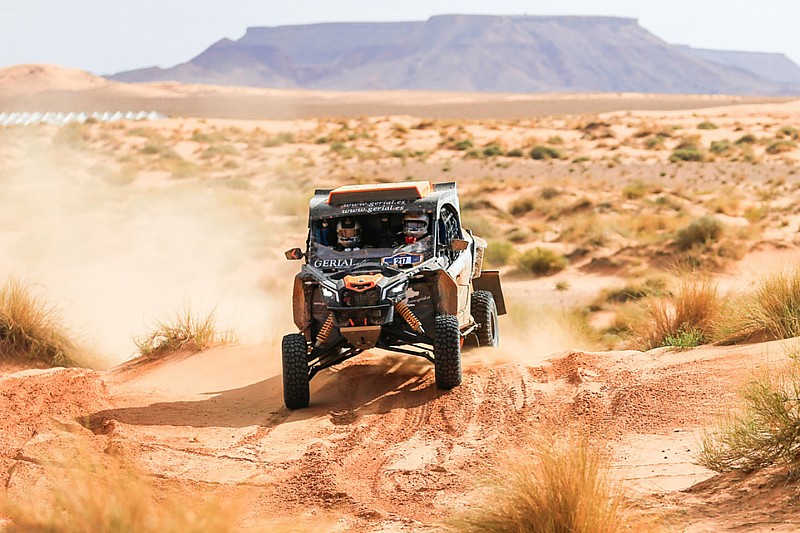 For the first time in Morocco’s Merzouga Rally, Dakar winner Nasser Al-Attiyah did not win a stage and Spaniards Jose Antonio Hinojo and Javier Blanco prevailed on stage four.

The penultimate stage of the event was the second part of the Marathon (without mechanical assistance) and marked in the program as the ‘principal stage’ of the edition – full of dunes and complicated navigation.

The 205.27km from ‘the bivouac in the middle of nowhere’ to Erfoud were a torment for some, but the leaders maintained their positions.

In SxS, Al-Attiyah and Matthieu Baumel lost for the first time a stage in this rally, after having taken it “calmly”, as they eyed the finish line tomorrow. The victory went to Hinojo/Blanco, who beat Al-Attiyah by 5m59s, with third placed Juan Miguel Medero and Diego Ortega another 12m31s in arrears.

Dani Sola saw his hopes of a podium finish thwarted by broken suspension. He tried to fix it overnight, but was forced to abandon 10km into Thursday’s stage.

In bikes, the South African Ross Branch surprised everyone with a 3m57s victory over leader Adrien van Beveren and 4m33s over the Italian Maurizio Gerini. Van Beveren still leads overall by almost 23 minutes.

The last stage of the 10th edition of the Merzouga will consist of a mass start, the so-called Grand Prix of the Dunes. The last 48km between the dunes of the Erg Chebbi will not allow anyone to relax.