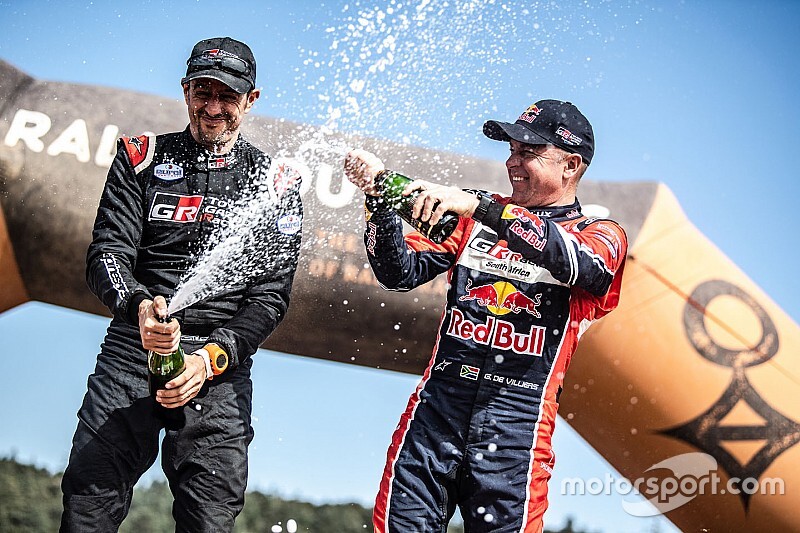 Giniel de Villiers has won the 2019 edition of the Morocco Rally, after Carlos Sainz’s bid to topple the Toyota driver faltered in the final stage on Wednesday.

Sainz sat 4m47s adrift of de Villiers heading into the last stage, but rapidly brought down that deficit to just 26 seconds in the first 146km of running.

Sainz’s troubles cleared the path for de Villiers to win the final stage of the rally, and with it take the overall victory for Toyota.

Sainz was classified a distant 12th in the 166km stage, but held on to second place in the overall standings, 17m42s down on de Villiers.

Mathieu Serradori completed the overall podium spots initially, but was later disqualified when his Century Racing CR6 was found to be 35kg underweight.

That promoted Jakub Przygonski to third overall, the Polish driver having towed his fellow Mini driver Sainz to the finish line.

Stephane Peterhansel took fourth to secure the FIA Cross Country World Cup title, benefitting from troubles of chief rival Nasser Al-Attiyah, who had led the rally for the first three legs until running into technical problems on Tuesday.

Alonso had shown top-10 pace throughout the five-day rally in his Toyota Hilux, but his work was undone by a suspension failure on Monday - caused when he hit a ditch that was not marked in the roadbook.

Update: Third-placed Serradori was excluded from the Morocco Rally after his car was found to be 35kg below the minimum weight, promoting Przygonski to the final podium spot and Alonso to 26th in the final classification.

Meanwhile, Andrew Short came on top in an inter-Husqvarna battle with Pablo Quintanilla to take honours in the motorcycle category by 1m21s.