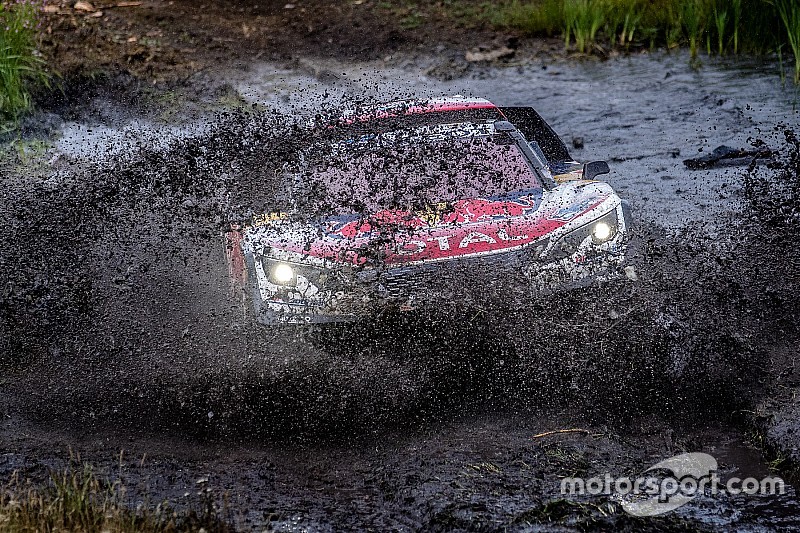 Stéphane Peterhansel (Peugeot 3008DKR n°106) won the 9th stage of the Silk Way Rally, but the notable event of the day was his team mate and overall lead Sébastien Loeb’s accident at km 84. This evening in Hami it is Cyril Despres (Peugeot 3008 DKR n°100) who leads the rankings. In the trucks Airat Mardeev (Kamaz-Master n°300) was fastest on the day ahead of his team mate Sotnikov, who maintain the overall lead.

Starting first this morning, Sébastien Loeb and Daniel Elena (Peugeot 3008DKR Maxi n°104) were ‘opening’ at km 84 when they fell into a dried river bed, badly damaging the front of their car. Shaken but unhurt, they lost 2h30 strapping the front together before restarting. They got as far as km 161 before they were again forced to stop, this time to wait for their assistance truck, that had been held up in the first dunes. Whatever time they make it into the bivouac this evening it would seem that once again they have waved goodbye to a victory that looked like theirs for the taking.

After having stopped with Loeb for around 7 minutes, but unable to offer much in the way of practical assistance, Stéphane Peterhansel and Jean-Paul Cottret (Peugeot 3008DKR n°106) carried on their way to take their 3rd stage win ahead of a trio of Chinese drivers, attacking hard on home ground.

Second on the special, Lu Binglong (Baïcmotor n°130) finished just 20 seconds behind ‘Peter’, with the Geeley SMG buggies of Liu Kun (3rd) and Han Wei (4e) 2m03s and 2m52s respectively behind the winner.

Fifth on the stage, 2m58s behind Peterhansel, Cyril Despres and David Castera (Peugeot 3008DKR n°100) are now the overall leaders, ahead of Han Wei at 44m12s and Bryce Menzies (Mini John Cooper Works n°105), who lost time today with punctures and navigation mistakes to slip to 3rd , at 52m23s.

Trucks : Sotnikov and the ‘Kamaz connection’

In the truck class it looked like Eduard Nikolaev (Kamaz-Master n°307) was heading for his 2nd stage victory on the 2017 Silk Way Rally 2017. But the Kamaz driver, untouchable over the first three quarters of the special, ended up giving away over 9 minutes with a puncture, less than 100 kilometres from the finish.

But in the heavyweight class one Kamaz can hide another… and it was his team mate Mardeev (Kamaz-Master n°300) who stepped up to win, just 36 seconds ahead of the overall leader, Dmitry Sotnikov and 5m09s ahead of Shibalov. At 9m25s behind his comrades, Nikolaev rounds out another one-two-three by the Blue Amarda.

Overall Sotnikov leads Shibalov by 14m27s and Mardeev by 26m30s. As a result Martin Kolomy and his Tatra Phoenix slide off the overall podium 31m30s behind the leader.