Vladimir Vasiliev adds another victory to his growing collection at the end of the Cross Country Rally known as the Northern Forest Baja event in Russia.

You'd be forgiven thinking that rally-raids are about deserts and dust but the FIA World Cup for Cross Country Rallies and Bajas kicks off here in the snowy forests near St Petersburg, in the aptly named Northern Forest Baja. Missing from the full calendar for the last two years the popular event was run as a candidate round with the aim of being restored to its rightful place to the championship in 2014.

The ski resort of Igora hosted the HQ and 43 crews passed through scrutineering to line up in a lightly falling snow for the prologue. 4km of sweeping turns and jumps along a specially ploughed track with thick walls of snow either side was all the teams had to negotiate... but it turned into a nightmare for a couple of the top teams... 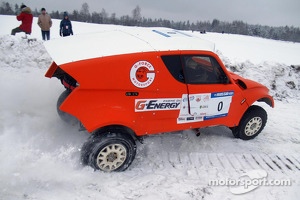 First away was Boris Gadasin the '0' course opening car, the startling new G-Force. It has an opinion-polarising body-shape but the 8.2l V8 roaring through the trees sounded amazing.

Top rookie at this year's Dakar Vladimir Vasiliev was first contender away, dancing his older G-Force Proto between the banks and he ended up blitzing the field, a full 6 seconds ahead of ex WRC star Harri Rovanpera in his Mitsubishi. “It was very difficult as everything is new for me,” said the Finn. “I am used to driving with pace notes but here I need to tackle a road I don't know, with not many details from my co-driver. The last time I drove a rally without reconnaissance was 20 years ago, which is a long time!”

But not everyone got around the course without incident. Ruslan Misikov in his stunning new Nart Time BMW lost over 19 minutes. “There was a sharp turn after a crest and it looked as if it went straight on... and we got stuck on top of a snow bank with the wheels spinning. Of course, I am disappointed, we were pushing for podium…” Other unfortunate names in the field included Ilya Kuznetzov, also back from the Dakar where he was competing in a SAM Mercedes. He found the same snow bank as Misikov. Alexey Burkut only got 2000 metres before the gearbox on his Subaru broke and Andrey Rudskoy found that his 200 Series Land Cruiser was a bit wider than the track and ripped a wheel off on a tree. 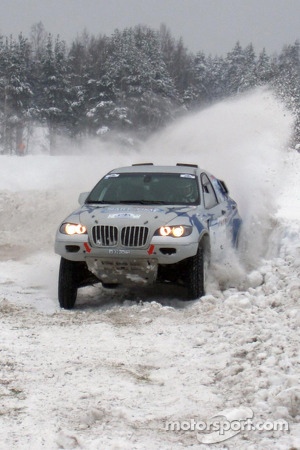 With three runs through the same 100km stage the second day saw the real action. Fast and sweeping roads alternated with tight and rough tracks that threaded through the endless trees and to punish even the slightest mistake every twist and turn was lined by unforgiving snow banks.

On TV the news was all about the thunderous Russian skies but it was thunder in the forests as Vasiliev blasted away n his awesome sounding 7l V8, and an hour and 18 minutes later he was first at the finish control. But after loosing 2 minutes changing a tyre punctured on a sharp tree root he wasn't first on the time sheets. Leading the field was Jouni Matti Ampuja, a driver perhaps overshadowed in the pre-event build up by his well-known team mate Harri Rovenpera. “We only did 10km of testing before the race so we didn't really know what to expect,” he said. His name might be new to most people but with 15 years of rallying experience in his native Finland driving fast on snow and ice certainly isn't new. But while one RE Auto Klub driver was happy with his performance Rovenpera had a rather less successful stage in the sister Mitsubishi after a roll cost some 25 minutes. “The road is harder than I thought,” he smiled and the 2nd loop wasn't any easier as he lost power steering...

In 3rd place after the 1st stage was Evgeni Firsov in his in his Team PEC Nissan, just 2 minutes behind Vasiliev. But trying too hard to win the second loop he had a spin. But instead of making him drive a little more cautiously he was determined to push even harder... 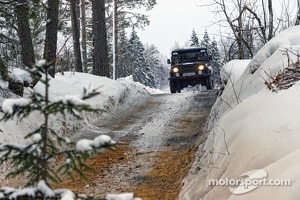 With a clear run through Stage 2 Vasiliev took 3 minutes out of a rather shocked Ampuja, although the Finn was slowed with a failing 3rd gear. “I have to hold the gear stick in so it's quite hard to drive,” he explained. “And 3rd is the gear I use the most.” But any hope of pushing for a win on the last stage was lost when he also lost 2nd and 4th.

Moving up to the final podium position was the 2nd G-Force of Victor Volikov, co-driven by his son Anatoly. “The 1st stage was really slippery because of the fresh snow as the studs in the tyres couldn't get down to the hard ice underneath, but the 2nd stage went much better for us, although the gap to the car behind us is not so big.” Firsov was just 35 seconds behind and wasn't ready to settle for 4th... but this time he didn't just spin, he caught a tree and rolled over a snow bank and came to rest blocking the road.

In my years of off-roading I have seen many Land Rovers at the end of a tow-rope but never one behind a G-Force. But as is often the case in Russia, things weren't quite as they seemed. “Something went wrong on the car and we went straight into the trees,” explained Ukraine's Bogdan Novitsky. “Many crews stopped to try and help but no one could get us out but then Mikhael Lisyak came in his Land Rover. He managed to get us out but it cost him the radiator... which is why we towed him to the finish.” 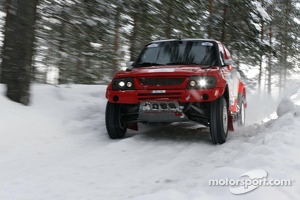 A Mitsubishi without a full compliment of gears was never going to be able to challenge Vasiliev and he took it easy through the last stage, although his time was still 1 ½ minutes faster than the 2nd pass. The highest placed rookie in the deserts of the Dakar came home to the frozen forests and adds another trophy to his growing collection. Ampuja was relieved to get around the last stage and took 2nd 6 minutes behind. “I never raced in Russia before but the atmosphere here is great and I'd like to thank my team, RE Auto Klub. I think that I'll be doing some more rally-raids with them in the future.”

It also seems that we'll also be seeing more of Rovanpera in the World Cup as despite only finishing 9th he was impressed with his first experience in Russia. “The organisation here is great and the next idea is definitely to go to Italy and then maybe some more races as well, but we'll need to sit down and talk with the team.”

The immediate rally-raid future is the Italian Baja on the 14th - 17th March, where Vladimir Vasiliev will hope to retain his 2012 crown.

And one footnote that also relates to the future. Boris Gadasin was running as the '0' car which is still in development... and had he been in the race he would have won!