Images of a bright-orange Hummer chasing a pea-green Mini across the South American landscape are still fresh in our minds but the Dakar isn't the only rally-raid event in the world. The FIA World Cup for Cross Country Rallies takes place all over Europe and the Middle East, in terrain more varied, and on stages some say are even harder than the famous 'mother' event. 2012 will see the teams tackling Bajas, and the longer Cross-Country rallies in Italy, UAE, Qatar, Tunisia, Morocco, Spain, Hungary, Poland, Egypt and Portugal, but the first round of the season was a candidate event vying for full inclusion in the 2013 calendar... the White Hills Baja Russia.

F1 has Vitaly Petrov, and Evgeni Novikov is impressing in the WRC, but it's rally-raid that Russian drivers really seem to excel in. Finns are famous in rallying because they are used to the speed of the roads in their native forests and some joke that maybe the Russians are so good at the tougher rally-raid series because they are used to the terrible state of their roads. Leonid Novitsky in an X-Raid BMW X3CC won the 2011 FIA World Cup and two-time Baja Championship winner Boris Gadasin was 3rd in his self-built G-Force Proto. Russia also took the Production Cup trophy as Ilya Kuznetzov dominated the T2 class in his Toyota Land Cruiser. 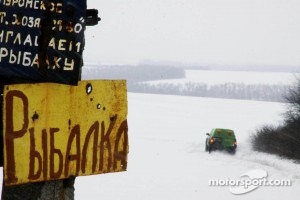 Though, it was the weather that was the talking point at the start as the prologue was run in a raging storm that whipped the snow off the banks so that it was hard to see the road and stung my face so much it was hard to take photos, yet it wasn't the brutal cold of the infamous Russian winter that caused the problems. When it is -20 the snow is powdery and light but when it gets warmer it gets wetter and becomes more compactable... and as the temperature rose to an unseasonable zero degrees the plows had real trouble trying to clear the 115km long track... so much so that the first cars had difficulty fitting between the snow banks. After winning the prologue with a super-smooth display of sweeping powerslides around the constant twists it was Victor Volikov first away in his formidable 7 litre V8 G-Force Proto. “It wasn't too much fun to drive down a tunnel at 150km/h,” he smiled.

About half way through the stage that wound through the rolling winter landscape of southern Russia his team mate Vladimir Vasiliev had caught up with him, although finding a way past was quite hard. Only when Volikov was too rough with his sequential gear lever and snapped it off did Vasiliev find a way through, but so much torque do the G-Forces have that even while driving for 30km stuck in 4th gear he only lost a minute, although he got another 60 seconds as a penalty for being late out of the service park. “We could have made it with a couple of seconds to spare, but we came so fast with mud flying everywhere that we scared the marshal so much he ran away...”

Behind the battle of the monster T1 cars was a tight field of T2 competitors including current world champion Ilya Kuznetzov, who thought it was wise to tackle the narrow stages in a Mitsubishi Pajero rather than his much wider Toyota Land Cruiser, but it was the Kazakhstani team of Andrey Cherednikov and Alexander Moroz in their immaculately prepared Mitsubishi L200 who took a commanding lead... until the engine died. “There wasn't much grip after the cars in front had chewed the track up but once we got used to the conditions we started to push and actually I'm not surprised that the time was good enough for first," said Andrey, before being towed back to the service area at the end of a rope. 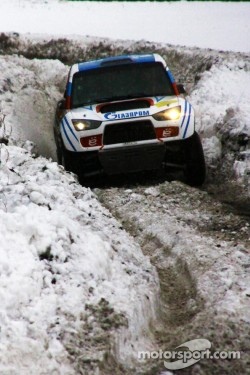 In the end the track was too bumpy for Kuznetzov's short-wheel-base Pajero and the lead was fought between Alexey Yaskov in his Toyota LC Prado and Andrey Novikov in another Land Cruiser. It was a nail biting last lap when Novikov clawed back a minute, but Yaskov held on... although for being caught not wearing their HANS devices Novikov was excluded, promoting Kuznetov up to second.

One of the most interesting vehicles in the field was the new Yoh Crossover, Russia's newest car, looking something like a Lada Niva mated with a new Mitsubishi Lancer. The world's largest country is home of both the world's cheapest and most expensive 4x4s with the Lada Niva and the Kombat T-98, and at the end of the year this strangely named, but nice looking, SUV will be on the streets... but it won't be a normal vehicle. A gas powered engine will run a generator which will turn an electric motor. It's a bold experiment and it's also a brave idea to test all the components in a rally-raid competition. The drive train was powered by a slightly more traditional engine than the road version is destined to have, but as an indication of how serious this team is, a 3 litre, twin turbo diesel was under the bonnet, the same type that recently took MINI to a 1-2 in the Dakar. Because many of it's parts are not yet homologated by the FIA, the Yoh was running in the much less restricted National class... but even so it was a surprise to see on the split times from the first stage that it was leading overall! Yet driver Aleksandr Zheludov was slowed with faulty windscreen wipers and a few loose bolts in the suspension which made the handling hard, but the second stage wasn't so good when 25km something serious stopped the car. "There's a lot of parts and elements that combine electrical and mechanical processes in the drive-train and there was a malfunction with..." one of the team members with the best English tried to explain. We settled on the translation of 'Teething troubles'. 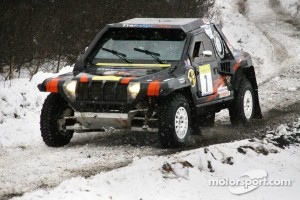 The Russian contingent put in a great performance in the recent epic Africa Eco Race with Sergei Savenko winning the T1.4 class (diesel buggy) and Maxim Kirpilev and Pavel Ushakov taking 2nd and 3rd in their 80 Series Land Cruiser pick-up in the T2 class, although they excelled in the Saharan sand, the snow of their native Belgorod wasn't so good for them. Savenko in his 4x4 buggy that looks a bit like a squashed Jeep with a Honda NSX engine found a car park of other cars stuck after one corner and went to join them, losing about 20 minutes. Ushakov rolled on the second stage and although Kirpilev finished 10th his race almost went up in flames... “We almost hit the village gas supply tank,” he laughed. “We slid off the track and I tried to turn the car so that it would hit on the side... the co-driver's side, of course.”

“Bah... Just a normal day in the office,” his thankless navigator Vadim shrugged.

The second full day was 2 more laps of the 115km stage and started in the half light of a slow dawn with both the G-Force Protos sliding about in the slush kicking up the snow from the side of the track. I was in the back of G-Force team leader Boris Gadasin's Range Rover as we ran around looking for an interesting place to watch so he could judge in which areas his two drivers could use some advice. Vasiliev was a few minutes ahead of Volikov and then it was nearly 10 before the next car came into view... but back at the finish in the re-group between stages it was the Mitsubishi Pajero of Aldis Vilcans parked between the two G-Forces. Victor wasn't in the mood for chatting but his co-driving son Anatoly explained that they flew over a jump near the finish a bit too fast and ran out of road to break for the next corner. "It took us 10 minutes to dig ourselves out of the ditch with spades and the sand tracks." But it wasn't Vilcans that Volikov lost second place to. The less restricted 'National' class (which the Yoh Crossover was also in) was also competing for overall places and Artur Murashkin in his Nissan Pickup started the last stage 1 minute 38 ahead... It was a very determined Volikov we saw whacking sideways into the banks on either side of the tracks on the last stage but the National class is run behind all the other runners so it was a nervous wait back in service to see if he'd done enough to keep ahead of the Nissan. His sweat-soaked T-shirt steamed in the cold air as he peeled off his race suit as members of the team tried to get updates on Murashkin... but there was no time... he never made it to the final check point and by the time of the prize giving there was still no news of what had happened. 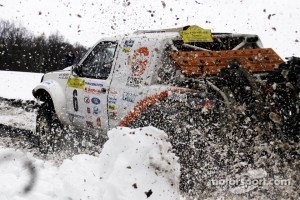 So, on the top two steps of the podium it was the two G-Forces which dominated the FIA T1 class. Last year, when Vasiliev beat the likes of Peterhansel and Holowczyc to win a stage of the Silk Way Rally and then was leading the Pharoans rally ahead of Schlesser I said that this guy was one to watch. Watch him in Italy in two weeks when two-time Baja world champion Boris Gadasin is back in the lead car...