Up to 20 riders could still win Dakar, says Honda 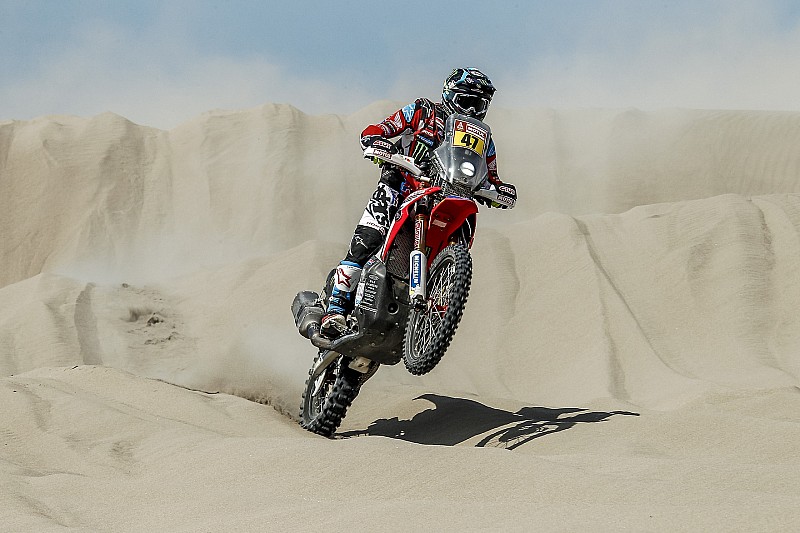 As many as 20 riders could still win the 2018 Dakar Rally in the bikes class, according to Honda team manager Raul Castells.

Despite the opening six stages of the South American event being dominated by gruelling dunes and rugged off-road terrain, no one rider has been able to gain a decisive advantage during the first week, with less than 20 minutes splitting the top nine riders overall.

With the top 15 riders still all within an hour of each other, and the two longest stages of the rally coming up on Saturday and Sunday, Castells believes the race for top honours remains almost as wide open as it did at the start of the event.

"Nobody can be discounted," he told Motorsport.com during Friday's rest day. "The first 15 or 20 riders have a chance to win.

"Every day things are happening and you cannot lower your guard. One day you are 10th, the next day you may be ahead.

"For the coming days there is no strategy, only to keep Kevin in front and try to get Joan as far up as possible. Knowing what Joan is like, he also has the chance to win. It's a normal approach.

"Our motorbike is one of the best bikes at altitude and it does not worry us at all. I think others are more worried than we are, so we are calm."

While the cars contest has seen several leading drivers already fall by the wayside, the only major bikes retirement of the first week of the Dakar has been that of reigning champion Sam Sunderland.

The KTM rider squashed two discs in his lower back after a heavy landing off a jump during Tuesday's fourth stage and had to be airlifted back to the bivouac before being taken to hospital in Lima.

He has since returned home, and is believed to be weighing up whether to have surgery.

"We are happy because we have chances with enough riders," KTM sporting director Jordi Viladoms told Motorsport.com.

"The only thing was losing Sam, who was leading and looked strongest, in the first week. But that happened to us last year with Toby [Price] and in the end everything went well.

"Things are going well and everything is very open. Now we have passed the dunes and the Dakar radically changes on the next few stages on the way to Argentina."

Viladoms also made it clear that KTM would not be focussing all its efforts on its best-placed rider, last year's runner-up Walkner, as the Dakar enters its second phase.

"[Antoine] Meo and Toby are doing very well; sacrificing them now in favour of Matthias would not make sense," he added. "I also see Laia [Sanz] doing very well.

"If something happens to [Walkner] like Sam and he has a fall, we will have lost all our chances."

Yamaha in the hunt

While arch-rivals Honda and KTM remain the two pre-eminent brands in Dakar's bikes class, Yamaha has mounted its strongest challenge in some years with Xavier de Soultrait also well in the running as well as van Beveren.

For Viladoms, the Japanese marque's progression only boosts the prestige of winning the Dakar as KTM aims for a 17th successive victory.

"During the year we saw that they were doing things well," he said when asked for his opinion on Yamaha's strong showing. "Van Beveren is very fast and de Soultrait has taken a step forward with a works bike.

"I think it's good that they have also entered the battle. It makes the race more interesting and we hope it continues like this until the end."

But Yamaha sporting manager Jordi Arcarons - himself a 27-time stage winner on the Dakar - said nothing can be taken for granted with the most demanding stages of the rally still to come.

"We have been working all year and the result is this," Arcarons told Motorsport.com. "We have done a very good first part [of the rally].

"Both Adrien and Xavier are among those who fight for victory and that's what's important. But there are almost twice as many kilometres [still to come] as we have done.

"KTM has years of experience and Honda has been looking for victory from the first day.

"They are very tough rivals. If we want to achieve something we will have to work, it will not be by luck."