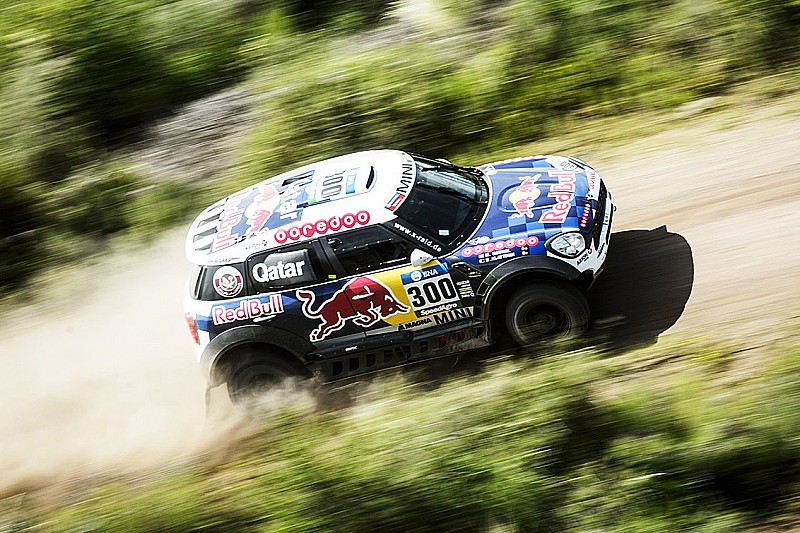 Former Dakar Rally winners Nasser Al-Attiyah and Nani Roma have both admitted their Minis have been no match for the all-conquering Peugeots in the Dakar Rally thus far.

Last year’s event winner Al-Attiyah is the closest competition for the French cars of Sebastien Loeb and Stephane Peterhansel, but is already over 11 minutes in arrears.

“We tried to keep up with Loeb, but his car was very fast – it was impossible,” said Al-Attiyah.

“I was pushing from the beginning, but we lost a lot of time in a straightline. I tried to attack again and again, but it was impossible to follow the Peugeot. The buggy is going fast.”

“They are very strong today, but you don’t know what is coming.”

Roma: “They have surprised me”

The 2014 winner Roma hit trouble when he got stuck behind rivals on today’s marathon stage, which was run in Jujuy for a total of 629km, 429km of those timed.

“They have surprised me, frankly,” Roma told Motorsport.com of Peugeot's challenge. “From the beginning I said that we should be careful with Peugeot.

“[But] I did not think they would be as competitive in these early stages. If they do not have problems, it will be difficult to beat them.”

“It was a really fast stage today, which suited the buggy – and I lost time when I got stuck in the dust [behind the Toyota of Vladimir Vasilyev and the Mini of teammate Orlando Terranova] for 200kms."

The second-highest Mini overall is former WRC star Mikko Hirvonen, now seventh after placing only 12th fastest on today's stage, who reckoned a combination of a power deficit and his lack of prowess over the bumps was the main factor.

“I didn’t really enjoy it flat-out in sixth gear, when it’s fast like that over all the compressions, as I don’t have the experience - that is where I’m losing time,” he said.

“It was quite a boring stage, in a way. I hope it’s more technical tomorrow, at the end of today’s stage we had 70kms absolutely straight – there’s no point! I want a challenge.”