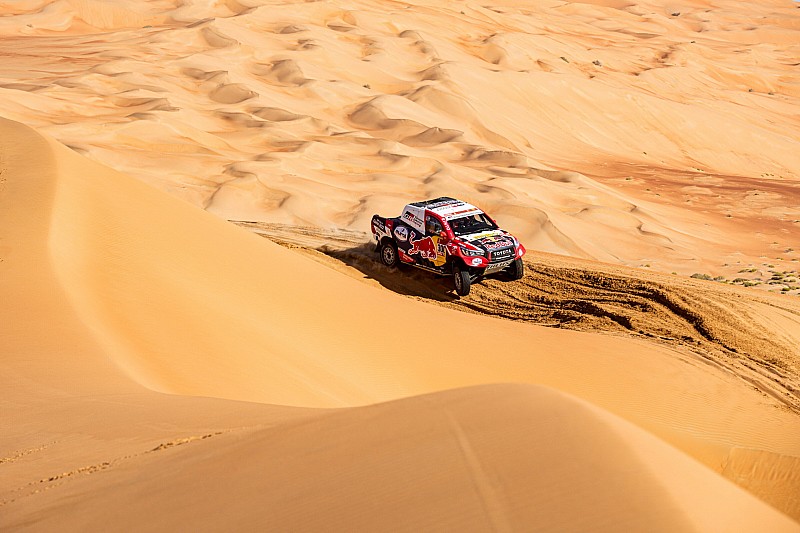 Toyota driver Nasser Al-Attiyah believes the current Dakar Rally regulations are "not fair" towards four-wheel-drive cars, and expects the balance to be addressed for 2021.

Al-Attiyah, who won the 2019 Dakar in the four-wheel-drive Hilux, finished six minutes behind the winning two-wheel-drive X-raid Mini buggy of Carlos Sainz in the 2020 edition of the event.

Meanwhile, the Mini buggies of Sainz and Peterhansel combined for eight stage wins, with the remaining stage victory going to Mathieu Serradori in the Century CR6 buggy.

While the Mini buggies are allowed a 39mm air restrictor, the normally-aspirated four-wheel-drive Hilux had its air restrictor's diameter slashed from 38mm to 37mm ahead of the 2019 Peru-based Dakar - which Toyota nonetheless won.

Asked by Motorsport.com if he enjoyed taking on Sainz and Peterhansel in the Saudi Arabia-based 2020 edition of the marathon, Al-Attiyah said: "I will enjoy more when I will see Carlos and Stephane drive 4x4, not buggy.

"This [Hilux] is a full evolution. But we've gone 1mm restrictor down, this is the problem. From the start [of the marathon], we've lost one hour from [the] 1mm restrictor difference.

"To be honest - I don't want to say something bad, but the regulation is not fair between the buggy and the 4x4. Like, for example, last three or four years with Peugeot['s buggy], when it's coming, it's coming with a good car.

Behind Al-Attiyah, four-wheel-drive cars took places from fourth to seventh in the 2020 Dakar standings, but these competitors completed the marathon between 40 and 80 minutes slower than Sainz.

"If you compare last November in [Rally] Morocco, we are completely surprised this time, because after in Morocco we are leading, it's a different story.

"I think for me the Mini was putting the engine down in Morocco, here it's completely full, this is no question.

"If you see the second car in four-wheel-drive, how many minutes behind me? A lot. I am always pushing, fighting, even the Mini. The 4x4, it's too far, you know? It's not easy."

Al-Attiyah stressed, however, that he had enjoyed taking on the two Mini buggies in the Middle East, and took encouragement from topping the final stage.

"It was a great Dakar and also we are so happy to be here in Saudi, a new country. I think now most of the people will change their mind for the country.

"The last stage, when you win it, means we are coming next year to win Dakar."