Alvarez on a charge, Visser out of Dakar

The first section of the 433 km route from San Luis to San Rafael, Alvarez’s home town in the Mendoza province, was one of the fastest on this year’s event.

SAN RAFAEL, ARGENTINA – The lead Team Ford Racing Ranger of Argentines Lucio Alvarez and Ronnie Graue (308) made up for the day one disappointment by clocking the ninth fastest time on stage two of the 2014 Dakar Rally.

The first section of the 433 km route from San Luis to San Rafael, Alvarez’s home town in the Mendoza province, was one of the fastest on this year’s event. Wide open gravel roads gave the Ford crew the opportunity to reach the maximum speed of over 170 km/h on several occasions. 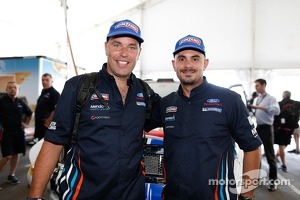 They picked up a puncture approximately half-way through the stage, and did well to lose no more than four minutes replacing the tyre. Then it was onto the vast grey dunes of Nihuil for the remaining 100 km, with searing mid-40 degree temperatures testing both man and machine to the extreme.

The local duo are now 38th overall, having moved up from 130th position overnight.

Unfortunately stage two signalled the premature end to the Dakar Rally for the South African crew of Chris Visser and Japie Badenhorst in the second Team Ford Racing Ranger.

Having endured an exceptionally long first day, they were well placed to make up numerous positions from the back of the field today. They were running well until they hit the treacherous Nihuil dunes, where the Ranger launched over a dune and rolled heavily.

Visser incurred a neck injury as a result, and was evacuated by helicopter to the bivouac in San Rafael before being taken to the local hospital for X-rays. The on-site medical team confirmed that he was alert and able to move, and more information will follow as soon as it becomes available.

Badenhorst emerged shaken but unhurt, and expressed his disappointment at the pairing’s Dakar dream coming to an end so soon.

Lucio Alvarez / Ronnie Graue (308): “We had a much better day with a generally clear run through the stage. Although we picked up a puncture this often happens on a stage like this and it only cost us four minutes.

“The first part of the stage was very fast and we were able to drive at maximum speed with confidence. The dunes were tough though as it was extremely hot. Other than stopping to let the tyres down slightly, a normal procedure in the sand, we made it through without stopping.

“We are still refining some minor issues with the car, but overall it’s a good package and we’ve made great progress.”

Neil Woolridge (Team Manager – Neil Woolridge Motorsport / Ford Racing): “It was an encouraging performance from Lucio and Ronnie today, which showed that the Ranger has the potential to be competitive.

“It’s only day two and we have a lot to learn about running the car in these conditions. We will be making improvements as we go along.

“In terms of Chris and Japie, first and foremost we are happy to hear that they have emerged from the accident without any serious injuries, which testifies to the strength of the Ranger. The dunes are extremely difficult, and regularly even catch out the front-runners. We have communicated with Chris and Japie’s families, and they will be kept up to date.

“Clearly we are all disappointed that they are out of the race, but the team will now focus its efforts on the remaining car and give them the best possible package through to the end.”