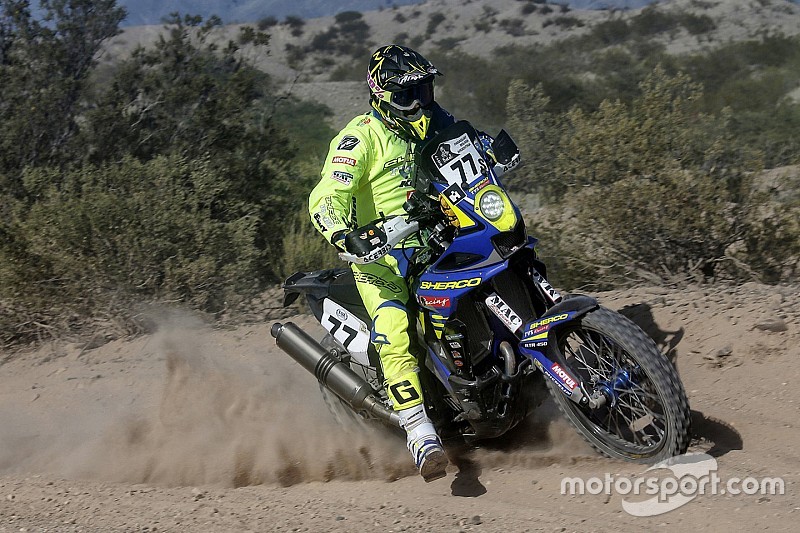 TVS Sherco rider Aravind KP believes his first Dakar outing was a valuable experience to build upon his future runs, even though it was cut short due to injury.

The Bangalore-based rider went into his first Dakar on the back of a strenuous preparation, racing in the Baja Aragon and the Morocco Rally - finishing both in his maiden attempt.

But his journey was shortened by multiple falls he encountered during his run. In Stage 1, Aravind was forced to take defensive action leading to his crash, where he broke two bones on his left hand.

Having rode with pain in Stage 2, his stint came to an eventual end in Stage 3, when he crashed 40km into the stage injuring his shoulder.

"I suffered the first fall in the prologue stage. I went hot into a corner; a slower rider came in my way," Aravind told Motorsport.com.

"I braked hard and fell, hurting my wrist which aggravated an old fracture on the wrist that happened eight years ago. Realized a bit later that I had two soft bone injuries as well.

"I was in pain but wanted to finish the rally, so I got first aid and continued on to the next phase.

"I had a fall 40 kms into Stage 3 as I hit a rock and thereafter I couldn’t get a grip of the handle bar because of immense pain and I had to quit," he explained.

Talking on Dakar being a team sport, Aravind thanked his teammates for their support during the hard times and went on to reveal about an incident from Stage 2.

Despite the injury to the Indian, he towed his stranded teammate, Metge, 170km back into the bivouac, after the Frenchman was stuck mid-stage due to a mechanical issue.

After Aravind was forced to retire, he chose to stay back until the end of the rally to watch the stages, to jot down the points for next year, as his teammates Pedrero and Metge finished 13th and 22nd respectively.

When asked about him realising his dream of racing in Dakar, Aravind admitted that "it was a larger-than-life experience" to compete in the world's most grueling cross-country rally.

"Being a rookie, I was definitely nervous prior to Dakar but equally excited to represent the team and the country.

"But my training and the encouragement from the team helped a lot. Though short-lived, it was definitely a great learning experience," he said.

Elaborating more on the outing, the Indian talked on varying terrains and weather conditions making it difficult for the competitors and the huge magnitude of the rally itself.

With the organisers focusing more on navigation rather than ultimate speed and endurance, so as to reduce fatalities, Aravind reckons he needs to work more on "endurance and trail riding".

Due to the injury suffered, Aravind was forced to miss this year's Desert Storm, but the Bangalorean is determined to get back into shape and start preparing for Dakar 2018.

"I am on the road to recovery and itching to get back on the race track very soon," he said. "If someone has been competing in just the Indian championship, it will just not be enough.

"He will definitely have no clue as to how Dakar is going to be. The ideal situation [for me] would be to ride in international rallies to prepare for the Dakar.

"I am looking forward to participate in various rallies both India and abroad to continue my growth and this amazing journey with TVS Racing."