Ricky Brabec says he has been “riding my butt off” in the 2020 Dakar Rally to get revenge for a heartbreaking retirement in last year’s marathon. 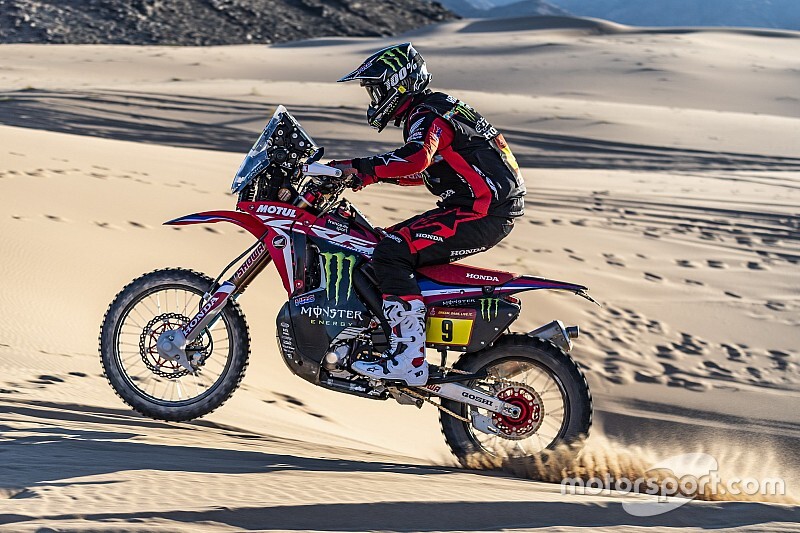 Honda rider Brabec was leading Dakar in 2019 until he suffered an engine failure on Stage 8, allowing Toby Price to take the win and extend KTM’s winning streak to 18.

The American has since bounced back from the incident and sits atop the standings heading into Saturday’s mid-rally break, having built up a 20-minute advantage in the first six stages of the rally.

Brabec says the events of last year mean he is more motivated than ever to score what would be first triumph in the Dakar Rally.

“I want revenge so I’m here riding my butt off,” Brabec said. “I’m doing well so hopefully we can keep the focus for the next seven days.

“The team is holding up great. I think we have a solid bike, we have a solid team, everyone is working well together from what I can see. So I’m super stoked on that. I’m positive we can hold it together for the next week.”

Brabec has downplayed suggestions that he feels pressure from his position as the category leader, and remains upbeat about his chances heading into the second half of the rally.

“I don’t really feel pressure in this position,” Brabec said. “There’s a long ways to go, so you have to keep calm and not get your hopes up but also not let your guard down. We are gonna do our best to maintain [the position].

“The rally is not over. But it feels really good to have a comfortable lead in general. So I was saying earlier there is long ways to go and we are gonna rest now and kinda put ourselves together, get ready for the next six days.

“I haven’t had tactics this whole time. I’m just going day by day. The second week I think there is more sand and maybe some more rocks.

“I hope there’s some more desert rocks and stuff like that, rivers. Because sand dunes are cool, but I really feel more comfortable in the rocks and the rivers and stuff.”