Another great day of competition at the 2014 Dakar Rally saw a rookie winner and the cream rise to the top.

Day two of the 13 day Dakar Rally is in the books, with competitors making their way from San Luis to San Rafael, Argentina.

Great Britain claimed a win in the bike category, as Sam Sunderland took home the stage win and bumped himself to third overall with a time of 3 hours, 42 minutes and 10 seconds.

“There weren't so many dunes, maybe 50 km or so, but it was definitely a lot of fun and a big mixture of terrains and different type of riding – some technical stuff, then some really high speed stuff. All in all for me it was a good stage,” said Sunderland. “It's great. The bike was awesome. Without all the work that goes on behind the scenes this is nothing, as you know, so I'm really grateful for the opportunity from Honda and all my sponsors. Hopefully I can carry on in this direction and have a good overall finish.”

The win was the Brit’s first stage win the rally. 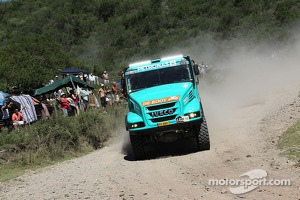 The Netherland’s Gerard De Rooy took home the stage win in the truck category, with a commanding win of over 13 minutes. The win gave De Rooy the lead overall, holding it by 13 minutes, 57 seconds over countryman Marcel Van Vliet.

Yesterday’s runner up in the quad class, Marcos Patronelli took home the stage win today. Patronelli crushed the stage on his Yamaha with a time of 4 hours, 40 minutes and 37 seconds, beating Argentinean Lucas Bonetto by 2 minutes and 53 seconds.

The car class saw another tight battle, with Frenchman Stephane Peterhansel taking the win by 46 seconds over legend Carlos Sainz.

Peterhansel now holds the overall lead, by a mere 28 seconds over Sainz. The next driver in line is Nasser Al-Attiyah, but he sits more than 4 minutes behind the pace.

Tomorrows stage is one of the shorter for the competitors, and will bring them from San Rafael to San Juan.

Check back with Motorsport.com each night for daily recaps of the stages.

Mini sitting one-two-three after three in the Dakar