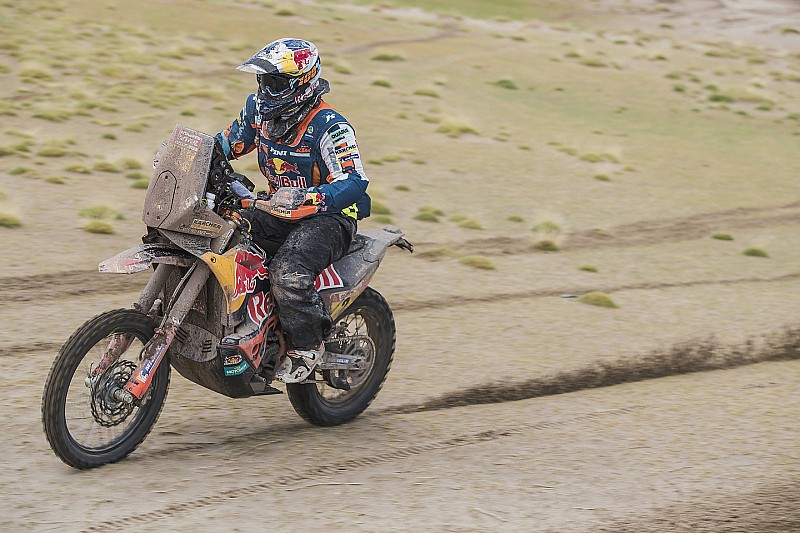 Matthias Walkner has become the favourite to win the 2018 Dakar Rally in the bike class after topping Stage 10, which saw Adrien van Beveren crash and four other contenders for overall victory get badly lost.

While the day started with six riders within less than 10 minutes of the overall leader, Walkner now holds a 39m42s advantage.

The KTM rider had a quiet start to the day and was nearly seven minutes behind leader Kevin Benavides at the mid-session break.

However, as the field restarted for the second part of the 373km stage, almost all of the frontrunners got lost.

Benavides, Toby Price, Joan Barreda and Antoine Meo all gave up huge amounts of time, with only van Beveren and Walkner managing to navigate their way through the stage.

The Frenchman was in prime position to end the day in the overall lead only to suffer a crash three kilometres from the finish.

The Yamaha rider was diagnosed with a broken right collarbone as well as thorax and spine injuries and was unable to complete the stage.

Husqvarna's Pablo Quintanilla and KTM privateer Gerard Farres were closest to Walkner, 11 and 16 minutes off the pace, and the latter has jumped into fourth place overall.

KTM duo Price and Meo are fifth and sixth, the latter losing the most time among the frontrunners as he was more than an hour slower than Walkner.

Dakar debutant Nicolas Cavigliasso collected his second victory in the quad class and closed in on the runner-up spot in the overall order.

He is only 1m53s behind fellow Argentinian Jeremias Gonzalez, who was closest to him on the stage.

Ignaco Casale maintained his dominant lead by taking third - the Chilean's advantage is 1h41m with four stages to go.