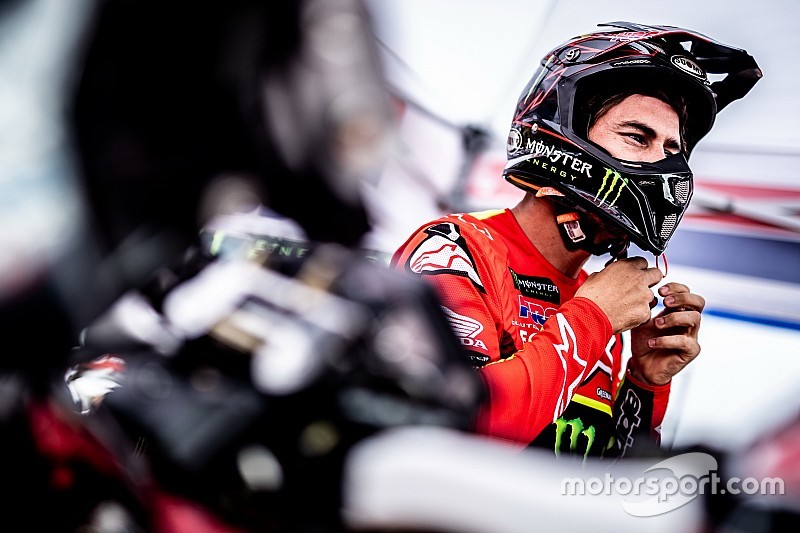 Honda rider Joan Barreda kicked off the 2019 Dakar Rally with a stage win, setting the fastest time within the Lima-Pisco route.

Barreda, who is yet to finish higher than fifth in a Dakar despite winning over 20 stages, was the top rider at both waypoints before arriving at the end as the pace-setter of the 84km timed section.

His closest challenger throughout the day was Husqvarna's Pablo Quintanilla, the Chilean spending the whole stage in second and ending up 1m34s adrift.

KTM, unbeaten in the class since 2001, had a relatively low-key start to the event as the brand's three top riders occupy the positions between fifth and seventh in the order of Sam Sunderland, Toby Price and reigning champion Matthias Walkner.

Paulo Goncalves, not yet fully recovered from a spleen injury he had sustained a month ago, was 11th as KTM's female star Laia Sanz kicked off the rally in 31st, 12m38s adrift.

In the quad class, Nicolas Cavigliasso kicked off the event as fastest, leading fellow Argentinian Jeremias Gonzalez by 3m55s.

As Ignacio Casale and Sergey Karyakin, the two dominant forces of the quad category, moved to the SxS class, last year's runner-up Cavigliasso became one of the pre-event favourites and he delivered on that promise by leading throughout the entire stage.

Apart from Gonzalez, Cavigliasso was over eight minutes faster than everybody with Tomas Kubiena completing the top three.

A third Argentine in Gustavo Gallego and Frenchman Alexandre Giroud rounded out the top five.

Aside from Kubiena with his IBOS machinery, the rest of the top seven was locked out by Yamaha quads.

FIM wants Dakar to be part of Cross-Country series