X-raid Mini driver Orlando Terranova leads the 2020 Dakar Rally after the second stage, in which star debutant Fernando Alonso has already lost over two hours due to damage.

By:
Valentin Khorounzhiy
Co-author:
Sergio Lillo
Listen to this article

Two-time Formula 1 champion Alonso was close to the frontrunners’ pace over the first 160 kilometres of the test, but his Toyota Hilux was then halted after an impact with a rock that left it with wheel and suspension damage.

Alonso and co-driver Marc Coma attempted repairs on the spot and ultimately resumed the stage after giving up just over two hours.

The Al Wajh - Neom stage, featuring 367 kilometres of timed competition, is the first of six in this year's Dakar for which the roadbook is made available to crews minutes before the start, as opposed to the afternoon of the prior day.

Much of the day’s proceedings were dominated by local hero Yazeed Al Rajhi, who led at each of the first five waypoints and was up by over six minutes after 250 kilometres, making up for the time losses incurred in an early detour on Sunday.

Al-Rajhi’s bid for stage victory and the overall lead fell apart in the very end, however, as he ceded over 20 minutes to fellow Toyota driver Giniel de Villiers, who ended the day as the pace-setter.

However, de Villiers’ opening stage travails mean he is only sixth in the general classification after two days, and trails Terranova by 12 minutes.

The Argentine, in a four-wheel-drive Mini John Cooper Works Rally, was second fastest on the day, while Khalid Al Qassimi in a privateer Peugeot and Mathieu Serradori in a Century buggy made it four different cars in the top four in the stage rankings.

The marathon’s two most recent champions, Mini buggy driver Carlos Sainz and Toyota’s Nasser Al-Attiyah, both surrendered over 10 minutes on Monday but are in the top three in the overall classification, with Serradori a surprise fourth.

Vaidotas Zala, who claimed a shock maiden win in the opening stage, was 19 minutes off Terranova’s pace here and now sits fifth overall.

Dakar’s all-time most successful competitor Stephane Peterhansel had been third behind Zala and Sainz, but lost more time than either as he struggled with a steering issue on his Mini buggy.

Peterhansel, however, only trails Terranova by 13 minutes in the general classification as he sits in eighth place, close behind de Villiers and Al Qassimi.

Maz driver Siarhei Viazovich was quickest in the Trucks class in the second stage of the marathon, seeing off nearest rival Dmitry Sotnikov by one minute and 46 seconds.

Viazovich, who claimed his and the Belarussian manufacturer's first stage win since 2018, now leads the Kamaz trio of Sotnikov, Andrey Karginov and overnight leader Anton Shibalov in the overall classification.

A bad day for Janus van Kasteren means the Iveco contingent is now headed by Czech driver Martin Macik, who sits 14 minutes off the lead but just seconds behind fourth-placed Shibalov.

Kamaz's fourth driver Eduard Nikolaev, who has the past three Dakars, had another low-key showing and currently completes the top six.

Lopez was among several drivers vying for the stage win, but was alone among the frontrunners in enjoying a smooth run through the final stretch of the test - in which the likes of previosu leaders Conrad Rautenbach and Austin Jones, as well as Jose Antonio Hinojo Lopez and Red Bull junior Mitch Guthrie, all lost significant amounts of time.

Casey Currie is Lopez's nearest rival in the overall classification after two days, and is 9m37s behind the Chilean. 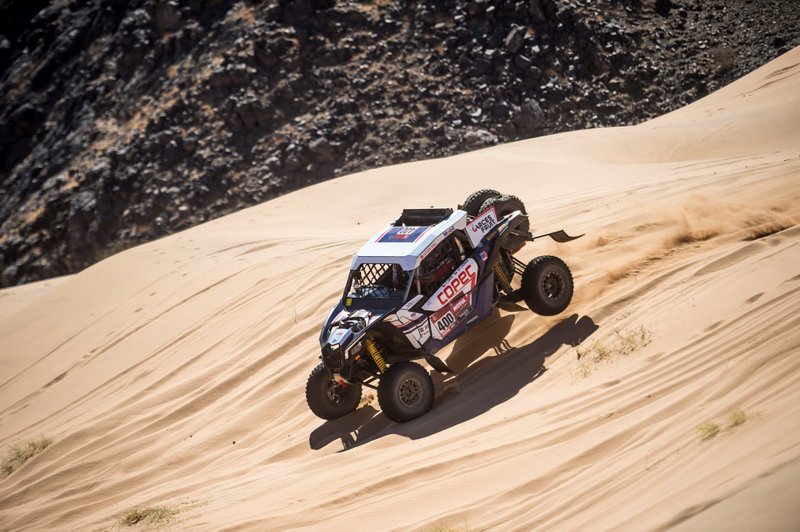 Alonso didn't know what he hit in Dakar crash