De Mevius holds third place at half time. 4752 kilometres or half way of the Dakar Rally (8602 kilometres) were brought to an end by the participants of the anniversary rally today. With X-raid team driver Gregoire de Mevius on his BMW X5 ranking ...

4752 kilometres or half way of the Dakar Rally (8602 kilometres) were brought to an end by the participants of the anniversary rally today. With X-raid team driver Gregoire de Mevius on his BMW X5 ranking 3rd in the total classification the best position ever of a four wheel driven Diesel at the Dakar was achieved. 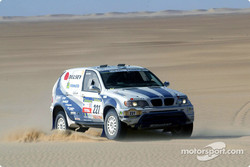 The city of Sarir, most important oil location of Libya, was the destination of the tenth stage today, leading over a distance of 554 kilometres (of which 521 km were special stage). In addition to the prohibition of using the GPS satellite navigation system, the teams lost their bearings on the first 120 kilometres in a sandstorm.

While Luc Alphand could decrease his delay on the leader continuously during the last days and even took a leading position at the day classification yesterday, a technical problem caused trouble today. Some 40 kilometres after the start a leak in the steering hydraulic system had to be mended. Alphand lost about 25 minutes and finally arrived in 18th position in the day classification. Due to orientation problems his team colleague Gregoire de Mevius took the wrong route and finished 9th with 22:03 minutes behind Hiroshi Masuoka (Mitsubishi). The Belgian took the mishap with humour: "This is the driest region of the Sahara . . . I am so happy that we got back out after all".

Tomorrow, the teams will return to the "desert sand box". Nevertheless, the eleventh stage will become no playful task at all, when the caravan will leave Libya and move to Pharao Country with numerous Ergs and huge dunes to be crossed. After the special stage of 438 kilometres (total 568 km) the participants will cross the border to Egypt and head for the Siwa Oasis. Surrounded by dreamlike springs, olive- and date palm trees, the teams there will take their well-deserved day of rest. On Tuesday (Jan. 14th) the last third of the Dakar Rally will be set about. Six stages are scheduled for Egypt, including a round course (Siwa-Siwa), one more stage without GPS (stage 15) and the longest stage of the Dakar 2003, before it will lead to the Sinai Peninsula in direction of Sharm El Sheik on January 18th.