Nissan and The Dakar Nissan sees Motorsport as a passion that shows the fighting spirit of the brand, providing excitement to the customers. It is also a tool to develop both the brand and its technological capabilities. Nissan has a long history ...

Nissan and The Dakar

Nissan sees Motorsport as a passion that shows the fighting spirit of the brand, providing excitement to the customers. It is also a tool to develop both the brand and its technological capabilities. Nissan has a long history of involvement in various areas of Motorsport, including Le Mans, Super Touring, Rally Raids and Rallying. 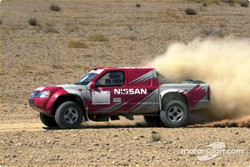 As part of the company's current global business strategy of developing the sales efforts and strengthening the brand, Nissan will be organising its Motorsports activities, taking part in events with vehicles which are closer to the product line-up, and closer to the customers, in order to have a more direct impact on the brand and on sales.

A perfect example of this is the Dakar. Nissan has a long history in the event through independent teams, but this year will see a full works team take part in the event. The reasons for this are multiple. The Dakar has a strong global impact, with high media exposure in important markets not only across Europe but in Japan as well.

This challenging, adventurous race has fans across the world, due to the conditions the cars and drivers face, the speeds they achieve over difficult terrain, and the huge distances they cover. Nissan has built up over 50 years of 4x4 heritage, leading up to the current models, from top selling X-Trail, - which is now the benchmark of the compact SUV in Europe- to the Pickup which is sold over 150 markets worldwide. Dakar is an ideal opportunity for Nissan to demonstrate its high level of expertise and the performance capabilities of its 4x4 range to the world.

However, the Rally Raid involvement does not only aim to develop the 4x4 business, but to develop and strengthen the Nissan brand as a whole, by broadening its appeal to a wider audience, in particular to young, active enthusiasts, giving the brand a stronger, more dynamic image.

Nissan has committed to a 4-year plan, entering the Dakar between 2003 and 2006. In line with the Company's Global Motorsport policy, the Nissan Rally Raid team for the Dakar will be a truly global one, with crew from Europe, South Africa, the Middle East and Japan. It will benefit from the support and experience of Andr? Dessoude, who has entered the Dakar for 20 years.

Nissan is sure its cars will be highly competitive, and will provide excitement and passion to customers and fans all over the World.

The Final Tests
A few weeks before the start of the 25th edition of the " Dakar ", the Nissan Rally Raid Team has completed the final tests of its vehicles.

The three Pickups prepared by Nissan were tested in South Africa (from where they originate) and the other two, prepared by the Dessoude team, in the Bordeaux region of France. 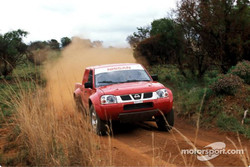 On the South African side, the three line-ups (Ari Vatanen/Tina Thorner, Kenjiro Shinozuka/Thierry Delli Zotti and Giniel de Villiers/Pascal Maimon) met up in Johannesburg to finalise the set-ups and to evaluate the potential of their new Pickups. This African episode started with a surprise, as during the presentation of the Nissan Rally Raid Team in South Africa, a very important guest came to wish them luck. Mr Nelson Mandela wished to encourage the team and greet all the team members in person, before the start of their great adventure ... an emotional and symbolic moment, which saw their entry in the Dakar turn into a national event. An unforgettable moment for all those present.

The day after this memorable event, the whole team met up at the Geroteck test track, around 100km from Johannesburg. At around 1600m above sea level, this complex of dirt tracks, speed loops and crossings provides the best variety of test surfaces. Everyone was impatient to get going, but the most impatient of all was definitely Ari Vatanen... After a long absence, he was finally able to rediscover the sport which has always been the passion of his life.

This busy day allowed everyone to evaluate the challenge they were about to face, and to prepare for it as best they could. Each of them was keen to share their feelings a few days before the start of the "big adventure"...

Ari VATANEN (FIN) - N° 204
"I really enjoyed these tests. Racing has always been in my heart, as it has been throughout my life. When you excel in something, like art or music, and they take your instrument or your paintbrush for five or six years, the day you rediscover them, you can only be overjoyed. Today, I am happy. What else can I possibly say ? In the team, everyone is working very hard. They are true professionals, passionate people who do not count the time they spend with the cars. We have done everything in order to be the best and they know it. This mix of cultures, this exchange between South Africa and Europe is very positive, and represents a beautiful experience. A sporting experience, of course, but more importantly a human one."

Kenjiro SHINOZUKA (JPN) - N° 201
"We did some high-speed tests and I am particularly satisfied. We had a few small problems, but nothing too worrying. We put ourselves through a real situation, and it must be said that the whole team has done an excellent job on the mechanical side. The Nissan Pickup is an excellent car and I am very pleased to be able to drive in the Dakar. Thierry (Delli Zotti) and I are very confident. A new team, a new car ... a new adventure."

Giniel DE VILLIERS (RSA) - N° 217
"The " proto " version of the Pickup appears to have started off well, and I think we have made a big step in the right direction. We still need to test a few small things, but the car is behaving very well. We will be able to judge it during the race, but as far as the basic set-up is concerned, it is excellent. This is a good sign, as we can only improve. I am impatient to get going and to continue to develop the car in real racing conditions. Pascal (Maimon) also liked the car. It is very promising for a new car to be so well appreciated from the very start."

Tina THORNER (SWE) - N° 204
"I must admit that I have been really impressed by the team and its spirit. There is a really professional atmosphere, and everything has been considered with care. Along with Ari, we certainly lack practice with the Pickup, but I think that above all, we will have to find the right rhythm during the first week, then increase the pace afterwards. The Dakar is not a sprint race: you have to hold strong for three weeks. This is the first time I have co-driven for Ari. I think that despite his absence for a number of years, he has not lost his determination or his potential. His competitive spirit is fully intact."

Thierry DELLI ZOTTI (FRA) - N° 201
"I have been agreeably surprised by the team spirit. I have met a number of passionate people, the kind you rarely find these days in the professional arena, who manage to maintain real human values. The team might lack experience in rally-raid, but not in competition. I feel really involved in this adventure. What I like is to become totally immersed in the environment, I spend as much time as possible with the team, and if I can help them with my experience, so much the better. The mechanical side is extremely important to me, it is a parameter which has to be learnt. Kenjiro would like me to "learn" the Pickup. On a Dakar race, if there are problems, you have to react quickly. Every minute lost on the track quickly turns into an hour at the end. The Dakar is a succession of problems to solve. When you sort one thing out, the next appears. During the tests, Kenjiro liked the Pickup. He feels comfortable and full of confidence, and is gradually getting his bearings. Like all the others, I can't wait for January 1st."

Pascal MAIMON (FRA) - N° 217
"I was really delighted with this test session, it was really superb. For a first test, the set-up was perfect. I felt a big difference compared to the car we tested in October (without independent suspension), and Giniel felt the same. Everything is very positive for the race. As far as the reliability is concerned, we will have to wait and see, but we know that the Pickups are very competitive and any teething problems can always be solved. No matter what, the race will be very open. The team is very professional and has extensive experience in the South African Championship. Everyone is very willing, and a real "family" feeling is building up. Teaming up with Giniel, I feel almost as if I am driving for South Africa, and that delights me. Giniel really impressed me in October during our first try-out together, and today he confirmed those first impressions. He is really a very promising driver, with a steady, thoughtful character. Even if he has no prior Dakar experience, he has been racing for a number of years in off-road championships. He will gain experience as the race goes on, but I am very confident."

On the French side, Team Dessoude met up at Biscarosse in the Gironde region of France. Thierry de Lavergne and Jacky Dubois took part in this session, while Khalifa Al Mutawei was booked in for the following session.

The team was literally carried away by the test. Everyone was enthusiastic about the Pickup, most especially those behind the wheel ... Thierry de Lavergne and Jacky Dubois. The tests mainly involved the tyre inflating and deflating system, as well as certain internal fittings for the co-driver's comfort. Andr? Dessoude was also very pleased with the session, as the ground was very similar to that which the competitors will encounter during the 2003 edition of the Dakar.

Thierry DE LAVERGNE (FRA) - N° 210
"I had a very good feeling with the car, straight away. It is very competitive vehicle, which has great potential. Its behaviour is impressive. I am really happy to be able to take the start of the Dakar behind the wheel of a Pickup. I think we can really aim for a good result. Moreover, the practice conditions at Biscarosse are excellent. The terrain is very similar to that we will cross during the event. The sand is occasionally even finer here. We were able to test the inflating/deflating system, which will be a key element on the event. I am confident about everything, and can't wait to get to Marseille... "

Jacky DUBOIS (FRA) - N° 210
"The Pickup is a great car, with excellent potential. Well built, it has true reliability. Unless we have some bad surprises, I am sure we can get a good result. The only slight inconvenience is that the space inside the cockpit for the co-driver is limited ... but after a number of small changes, it should be fine... "

Unlike Thierry de Lavergne, Khalifa El Mutawei is already familiar with the Pickup, having driven one during the Duba? Desert Challenge. Khalifa was impressed with the machine's performance and potential. With a fine navigator, Philippe Monnet, he will also be full of confidence when he lines up for the start of the Dakar.