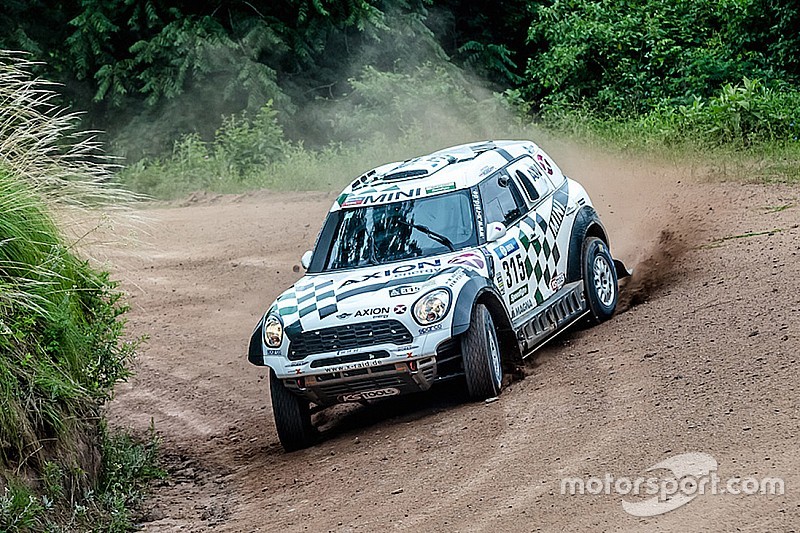 To say the pair had a consistent but fast race on the first high altitude stage is an understatement – staying within the top five group at every waypoint along the 429km Special Stage. Al-Attiyah will now look to reducing the 11:09m time variation on Stage 5, the second part of the first Marathon stage.

Nothing special happened today; in fact it was quite a boring stage in a way.

“I was pushing from the beginning,” said Al-Attiyah. “We were really fast in CP1, but after that we lost a lot of time in a straight line because of the bumps. We are going strong but we never know what is coming tomorrow... and there are still more days to come!

Mikko Hirvonen (FIN) and co-driver Michel Périn (FRA) in the #315 MINI ALL4 Racing didn’t fare as well as they have done in the previous three stages. They completed Stage 4 in 12th. The knock-on effect of this is a slip of three places to seventh overall and a good place to be given that this is Hirvonen’s first attempt at the infamous Dakar Rally.

Hirvonen: “Nothing special happened today; in fact it was quite a boring stage in a way. 200k absolutely flat out in sixth gear... so I wasn’t enjoying it. When it’s fast like that over the bumps I lose a little time. In the end of that stage we had an absolutely straight 70km section. I hope it’s more technical tomorrow.”

Terranova and Roma fight back to reclaim positions

With Stage 4 being the first full distance leg of racing at this year’s Dakar Rally – the first day without any major weather-related problems – all of the competitors had the opportunity to stretch their legs and cars. Possibly none more so than the AXION X-raid Team crews of Argentinean pairing Orlando Terranova / Bernardo ‘Ronnie’ Graue (#310) and Spanish duo Joan ‘Nani’ Roma / Alex Haro (#304).

With a fantastic display of cross-country rally driving using all their time-served skills, Terranova and Roma pushed their MINI ALL4 Racing hard. Terranova claimed another eight positions from yesterday, moving from 23rd to 15th overall. Roma nearly mirrored this achievement by jumping from 30th to 23rd.

“The start was difficult because we made a mistake at 3km and lost one minute,” said Terranova. “We lost some more minutes because it was risky to overtake. Also my body was worse than last year. Maybe there was less oxygen in this area and it made it difficult.”

Currently six MINI ALL4 Racing privateers have taken command of positions 10-20. The highest placed crew is that of Dutch pairing Erik van Loon and Wouter Rosegaar (Van Loon Racing #306). Their considerable Dakar experience will surely be tested to the full over the coming days by the remainder of the MINI ALL4 Racing family, all of which are currently breathing down the Dutch duo’s necks...