Cyril Despres and Vladimir Chagin added to their Dakar Rally victory tallies, as each one took a dominant victory in his category -- Bikes and Trucks, respectively. In the Quads, though, it was first-time winner Marcos Patronelli taking the honours ...

Cyril Despres and Vladimir Chagin added to their Dakar Rally victory tallies, as each one took a dominant victory in his category -- Bikes and Trucks, respectively. In the Quads, though, it was first-time winner Marcos Patronelli taking the honours as the marathon event concluded in Buenos Aires today. 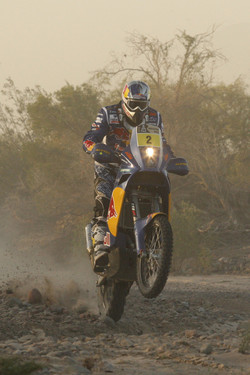 Despres scored a dominant third victory, adding to his wins in 2005 and 2007, as he finished some 63 minutes ahead of KTM privateer Pal-Anders Ullevalseter. In spite of KTM withdrawing official factory support in protest over rules changes by organizers ASO, Despres and Ullevalseter gave the Austrian manufacturer a 1-2 victory in the event.

"All victories are nice but this one is particularly beautiful. It is the victory of hard work, of expertise and of an incredible team," Despres said. "There are 9 of us in the team and not one of us ever let go. We all wanted to win; we all wanted to fight hard and we won. It's just fantastic.

"Of course there is a lot of emotion," he added. "We left Lac Rose three years ago in 2007. Since then we have had three tough years, three years of injuries, training, hard times. We can only be moved by this third victory. I am still human; I know I have been riding this bike for 15 days and I am exhausted but the little strength I had left just went in tears," he said. "KTM played a big part in this victory. They trusted us. We chose everyone. We have been working 24/7 for months. One thing is clear; I was not afraid of losing. I just wanted to win. And this will to win was stronger than the fear of losing. It was a tough Dakar, a beautiful Dakar and I am so glad I won."

Marc Coma, the winner of the 2004, '06 and '09 events, might have given the Frenchman a run for the victory, but by the third stage his chances were effectively nil. A twenty-minute penalty for speeding within a village on the second stage, and then another twenty minutes lost to mechanical problems the following day were enough to put him out of contention.

That was not the end of his problems, though, and the three-time victor finished 15th overall, over six hours behind Despres. He must now hope that he used up all his bad luck on this year's Dakar, and wait another year to try again.

Instead, it was Norwegian privateer and Dakar veteran Ullevalseter to whom fell the task of pressuring Despres. While he did not have the ultimate pace of Despres, he drove steadily to keep other challengers behind him, and finally yesterday marked another important milestone -- his first Dakar stage victory. 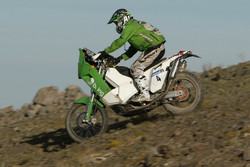 Today, it was a podium, his best result ever, and the first Dakar podium for any Norwegian, in any class.

"I have not had time to think yet. But this is amazing - almost unreal," Ullevalseter said. "I drove flawlessly today. The first 10 miles, so I saved the tires a bit, but then I felt suddenly others coming from behind faster than I liked, so I just gassed it -- and I succeeded!"

ASO's new rules, which were expected to favour 450 cc bikes rather than the high-powered 690 cc KTM machines, did not cause a landslide result for the lighter, less-powerful bikes, though, as KTM claimed not only the top two positions but eight of the top 12.

However, Helder Rodrigues and Yamaha stalwart David Fretigne did manage to take fourth and fifth places, respectively, on their two-wheel-drive Yamaha WR 450 Fs.

Rodrigues was pushing Contardo and Ullevalseter to the end, and finished just under 10 minutes behind Contardo. Fretigne, though, lost an hour and forty-five minutes to electrical problems on the second stage, and finished that much behind, plus another ten minutes.

Without Coma's and Fretigne's troubles, Despres might have had a much tighter battle on his hands.

The Truck category saw another dominant performance from Vladimir Chagin and the Kamaz-Master team. Chagin took his sixth win in the same category, a feat matched only by Dakar legends Karel Loprais in Trucks, between 1988 and 2001 and Stephane Peterhansel in Bikes, between 1991 and 1998. 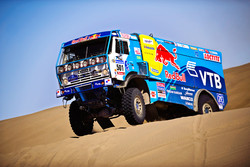 "It's our team's ninth victory," said Chagin. "There are not many teams with such a track record. This is the result of a year, of several years of work. Last year was good with Firdaus' victory; this year is an even bigger success. A fabulous result for Kamaz. Our team is really strong. I think it wants victory more than the other teams."

Chagin's win comes after a two-year gap that saw Hans Stacey and Firdaus Kabirov claim what "the Czar" might rightfully regard as his personal podium position.

This year, though, Chagin was unstoppable, as the Russian cross-country veteran pushed inexorably toward the finish, taking four stage wins along the way as he scored a faultless overall victory by a margin of 73 minutes over his Kamaz teammate and 2009 winner, Firdaus Kabirov.

In today's final stage, the Czar was content to secure the victory, allowing his teammate Ilgizar Mardeev to score a first-ever stage victory. Mardeev had settle for fifth overall, though, just under fifteen hours off the pace, including a five-hour penalty.

Instead, Marcel van Vliet took the final podium position in a GINAF x2222, though he, too, was far off the pace of Chagin and Kabirov, with a nearly eleven-hour gap to the category winner.

Martin Macik finished fourth in a LIAZ 111 another 98 minutes adrift of van Vliet.

In the nascent Quads category, running in the Dakar as a separate category for only the second time, Marcos Patronelli cruised to a comfortable two-hour, twenty-two-minute victory on the final stage, the widest margin of any of the categories.

"One thing is sure: I would never have imagined this, not even in my wildest dreams."

A steady ride was the key to Patronelli's victory, as the Argentine quad specialist finished in the top three on 11 of 14 stages, and always within the top six in the category.

With his performance, Marcos improved his second-place finish last year into an outright category victory, ahead of his brother Alejandro. "It's incredible that two brothers finish first and second of the same raid! This Dakar was very hard. I cannot say more than that, except that I must thank my team," he said.

"We are a family pushing hard, doing what it takes. I am also happy for my brother: it's his first Dakar and he finishes second! Who wouldn't be proud? I am thrilled and I think that the fact that two brothers finish first and second is just making history. We will celebrate that!"

Juan Manuel Gonzalez Corominas took third place in the category, five hours adrift of the winner. Like both of the Patronelli brothers, he was astride a Yamaha Raptor 700.