Five-time Dakar Rally winner Cyril Despres will enter the 2020 edition of the marathon as part of the Red Bull Off-Road outfit. 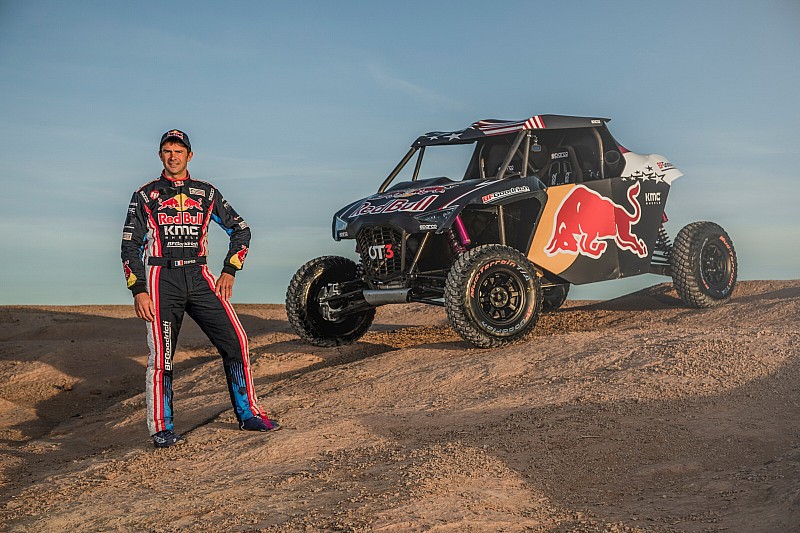 Red Bull announced a cross-country junior programme, analogous to its successful Junior Team scheme in Formula 1, in cooperation with Overdrive earlier this month.

Young American racers Blade Hildebrand, Mitch Guthrie Jr and Seth Quintero were announced as the initial intake, with all three lined up to contest the 2020 Dakar in the UTV (side-by-side) class in Overdrive's newly-built OT3 challengers.

Despres had carried out testing with the OT3 and was brought on board as a coach for the programme, but will now step in to replace Quintero for the first Saudi Arabia-based edition of the Dakar.

"The OT3 really surprised me: first of all the stability of the vehicle, as the engineers played with the regulations to have a 2.08-metre wide vehicle, which gives a lot of stability," Despres said earlier of the OT3.

"And they also used their knowledge to make a really strong and rigid chassis, something which is normally missing from side-by-side buggies. It also gives you precision when driving on technical sections, which is exactly what you need.

"The engine is powerful and the visibility from the cockpit is fantastic."

Despres won the marathon in the Bikes category with KTM five times between 2005 and 2013, establishing a famous rivalry with fellow five-time winner Marc Coma.

The 45-year-old Frenchman then switched to cars as part of Peugeot's factory Dakar assault, and finished third in 2017, before the French manufacturer concluded its cross-country programme the following year.

He finished fifth in 2019 in X-raid's new Mini JCW Buggy, but was left out of the German outfit's slimmed-down roster for the upcoming edition.

Despres' co-driver will be the famed explorer Mike Horn. Of his teammates, Hildebrand will be partnered by Francois Cazalet, while Guthrie will team up with Ola Floene, the former co-driver of WRC rally winner Andreas Mikkelsen.

Dakar Rally cracks down on navigation cheating for 2020