Despres: Time lost in Stage 7 is no disaster 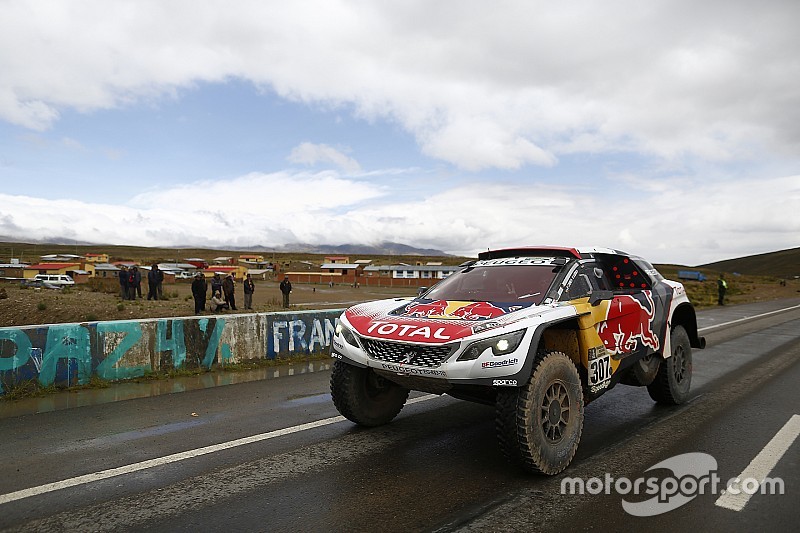 Despres was right behind his two Peugeot squadmates after the rest day, but dropped to 14 minutes off Peterhansel in the La Paz – Uyuni test.

The Frenchman has also slipped behind Toyota Overdrive's Nani Roma.

“Not so much happened,” said Despres, explaining the time loss. “We were in the off-piste, where apparently the track was better on the right – we were on the left, in the big camel grass.

“But we wanted to stay on the gap to make sure we get the waypoint. It was several kilometres straight without any reference, we lost a few minutes there.

“And the rest, Seb and Stephane were really fast today.”

Asked by Motorsport.com whether he felt he'd get the chance to make up lost ground, Despres said: “Yeah. I'm not crying, I'm not unmotivated. I keep going, keep pushing.”

Roma happy to stay in touch with Peugeots

Having passed Despres in Monday's stage, Roma is now 11 minutes adrift of rally leader Peterhansel and currently appears to be the only driver in position to threaten Peugeot's dominance.

"It was not an easy stage," Roma said. "A lot of navigation in the beginning, we made the lines - Seb opened the route, but sometimes we took a different way. It's not easy to open the route, you have to really take care about the lines. But we are happy, we are happy.

"When Stephane passed me, it was really tough to follow, but the Peugeot was built for this track."

The Spaniard reiterated that it was impossible for his Toyota Hilux to beat the Peugeots at altitude - and said he is eagerly anticipating a return closer to sea level.

"At this [altitude], we expected to have more performance on the engine side. I realised two days ago we really lose a lot at the higher [altitude] with the petrol car. But anyway, we wait until Salta, we're okay for the moment."

On whether he could make up the 11-minute deficit, Roma said: "It depends. The problem with this race, it's not easy, you really feel every kilometre you can lose. The roadbook is difficult, the navigation is difficult. You can lose at each kilometre. For sure, some things can happen in the next days."