Iveco shadows Kamaz as Dakar kicks off for trucks 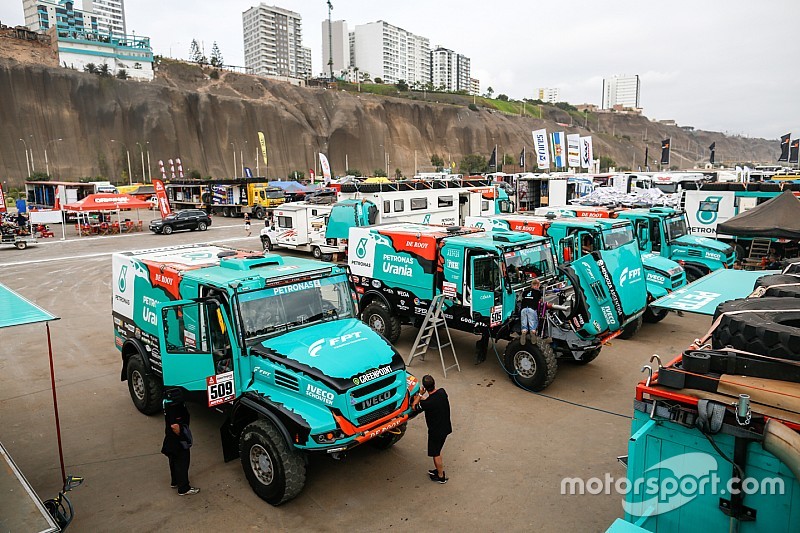 Three Powerstar Iveco trucks slotted in behind reigning champion Eduard Nikolaev on the opening stage of the 2019 Dakar Rally.

Nikolaev picked up where he had left off last year, completing the 84km timed special within the Lima-Pisco stage in 1h9m5s.

However, Kamaz will be aware they won't get to stroll to the finish with ease because the three Petronas De Rooy Ivecos demonstrated their credentials behind him.

Ton van Genugten was a real thorn in the Kamaz's side, reaching the finish line just 18 seconds from the provisional leader of the general classification as he recovered time with a brisk pace that highlighted the potential of Iveco Powerstar.

The Dutchman headed his two teammates, Federico Villagra and Gerard De Rooy, who were 53s and 1m44s adrift respectively.

De Rooy had a difficult start, so much so that at WP1 he was two minutes adrift of the lead Kamaz. He recovered to run in second place at WP2, but had to reduce pace when a tyre caught on fire late on.

The Dutchman is making his return to the Dakar after winning the Africa Eco Race in 2018, his comeback motivated by a route that should favour navigation skills.

The opening stage of the South American rally raid sets up a head-to-head match between Kamaz and Iveco as the three Russian trucks besides Nikolaev - those of Dmitry Sotnikov, Andrey Karginov and Ayrat Mardeev - making up the top seven.

The Tatra of Ales Loprais gave up more than five minutes, but he held off the MAZ 5309RR of Aliaksei Vishneuski and the Tatra Phoenix of Martin Soltys to be best of the rest.

The fourth Iveco Powerstar of Maurik van den Heuvel, who is new to the De Rooy outfit, was only 18th, an issue costing him more than a quarter of an hour.