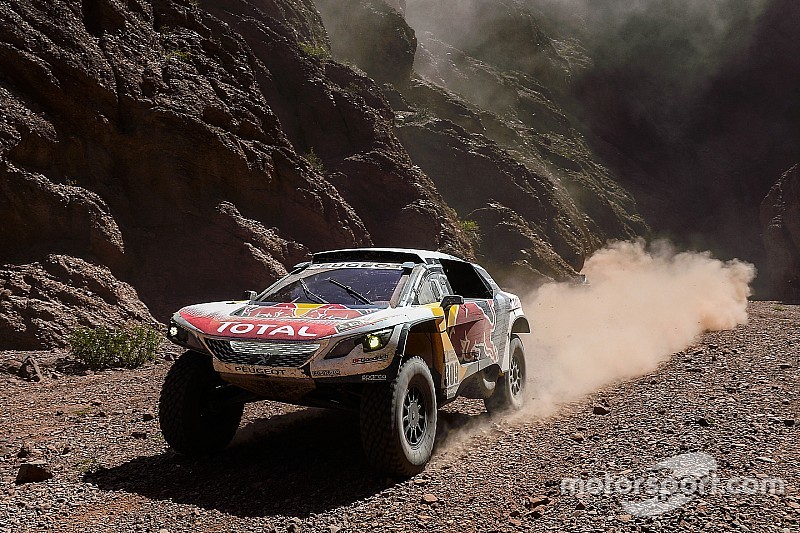 Nine-time WRC champion Sebastien Loeb has been encouraged by his second Dakar Rally despite missing out on victory, as he says his campaign will serve him well for future outings.

Loeb was right in the thick of the victory battle for the whole rally, winning five stages along the way, only to lose out by five minutes to Peugeot teammate Stephane Peterhansel in the overall classification.

Asked by Motorsport.com at the end of competition whether the satisfaction of a good performance was bigger than the disappointment of missing out on the win, Loeb said: “I think the satisfaction is still strong.

"It was a long race, to finish second is a good result - and especially to have Peugeot 1-2-3, it's incredible for the team.

“I'm really happy for the team, for sure from my side I would've preferred to win, but it was really exciting, and one of us had to win.”

Loeb believes luck wasn't on his side in the battle with Peterhansel: “We were not really lucky all the time, with the mechanical problem [in Stage 4] and the puncture that ended the fight [in Stage 11].

“We don't even know what happened on the car [in Stage 4], why it stopped for 26 minutes, we didn't find really the reason - and it works now. That was just really unlucky, and when you lose so much, nearly half an hour in the stage, for sure it's difficult to come back.”

Regarding the progress he and co-driver Daniel Elena had made compared to their Dakar debut in 2016, Loeb said that he was certain gains were made – but admitted the organisers' push for a tougher route this year had made for a daunting prospect at the start of the rally.

“I was confident in our evolution since last year," he said. "In the Silk Way [Rally] we learned a lot, and I knew that we were much stronger than we had been. But we still don't have the same experience as some of the others.

“It was not good news to know that there's no WRC stages - because it was always a complicated situation, in the middle of the stages, with navigation, all the time. So I didn't know.

“But finally I'm happy because I think we still were really fast, it seems that we are on a good way for the next rallies.”

Asked what he and Elena will have taken away from their second Dakar run, Loeb said: “I think the biggest thing we've learned in the navigation - and the experience we've gained with that can be helpful for the future.”

Peterhansel admits Dakar win down to experience, not speed

Sunderland “cried like a wimp” after clinching Dakar title