Dakar Rally promised that it will be the toughest competition after moving to the South America, and they completely fulfilled the promise.

Before the start of this 36th edition of the Dakar Rally promised the organizers that it will be the toughest competition after moving to the South America. And they completely fulfilled the promise. 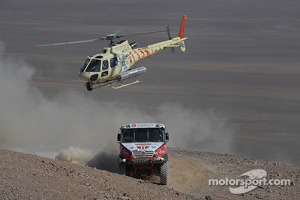 Many hard tests waited for the racers. They had to cope with driving at high altitudes. Motorcycles climbed to 4 300 meters above sea level, trucks often run at 3 500 meters above sea level. To make matters worse, all had to cope with extreme heat. Bikers begged for water during the stages and not only they suffered dehydration. Trucks crew had almost 70°C in their cabs. The rain cooled the participants before the start in Rosario, on Saturday at the rest day in Salta and during the final stage to Valparaiso. Otherwise they had to put up with a unbearable heat.


And also those “endless” specials – the fourth stage from San Juan to Chilecito had a measured section with a length of 657 km! Organizers came with such a long special after nine years. The combination of all traps did the hard time to many racers. Quit had to for example biker Marco Patronelli, who defended the primacy from the last year, the car legend Carlos Sainz didn’t get to the finish too. To the finish didn’t reach even some Czech participants.

But the stickers, whom technique lasted and who didn’t succumb to the wiles of the Dakar, fought till the end. Among bikers showed the most speed and experiences Marc Coma from Spain, who won the Dakar for the fourth time. Among the quads won for the first time Ignacio Casale from Chile. Among the cars were Mini specials the fastest – and although the Frenchman Stéphane Peterhansel attacked the record twelfth triumph, after the team decision won Nani Roma from Spain.

And the truck category? It was very exciting, not only due to the fact that our InstaForex Loprais Team had two crews in the race – crew number 504 and number 519. Aleš Loprais fought with the Queen 69 for long time for the overall podium place, but the failure in the penultimate stage meant a drop to sixth place which remained in the finish.

The team was able to carve out two stage victory, one second and one third place. For the victory in this category fought de Rooy with Iveco and Andrej Karginov from Kamaz. De Rooy leaded for a long time, but the overall winner is Andrej Karginov which was 3 minutes and 11 seconds before him. It was the closest difference between the first and second place at the finish at this year’s Dakar.

The second crew of the InstaForex Loprais Team which raced this year’s Dakar Rally in the composition of Jan Tománek, Michael Honda and Tomáš Kašpárek, still belongs to newbies in this competition. Although the crew of the Princess 69, the last year’s truck of Aleš Loprais, mainly gained experience, they didn’t race badly at all.

Just the fact that they led their truck to the finish destination in Valparaiso is an excellent testimonial. In the overall ranking was Jan Tománek on the 18th place with the loss over 18 hours. The loss is however distorted, because the crew of the Princess often helped the other trucks on the track – rivals as well as the team crew number 504 with the pilot Aleš Loprais.

As the key proved their cooperation in the 12th stage when the Queen 69 remained on the track with a cracked compressor hose. The crew of the Princess helped with repairs so the loss of Aleš had not to grow more. But also other Czech Dakar participants were grateful for the help of crew of the Princess. Jan Tománek and his crew helped for example rotate the overturned truck on wheels. “I am very happy about the drive of our second crew which raced with our Princess. They still rode in a beautiful pace, moreover helped others participants, which makes me happy too,” praised Aleš Loprais his colleagues.


Karel Loprais won the Dakar Rally six times. His nephew Aleš finished this year on the sixth place due to technical problems. But even so had Karel only words of praise for Aleš and the whole team. 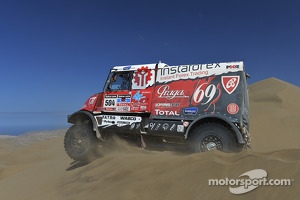 How would you evaluate this year’s Dakar? It was really hard. Organizers promised it before and the fulfil it. It was seen on apostates, their number was high. Marathon driving distances, height differences and enormous temperatures were demanding for all.

Two winning stages, one second and one third place. The guys didn’t lose in tough competition, didn’t they? Absolutely. They were seen and it proved that if the truck works as it should, they can beat the rest of the world.

When did they the worst mood? Was it after the penultimate stage in which they lost a chance to fight for the podium due to technical problems? I do agree. The loss was enormous, they couldn’t do anything. It’s a pity.

But they fought... Exactly, it was seen in the last stage. The mechanics worked hard and the crew did the great job on the track. Although they started from the back, they managed to set the fastest time.

However, in the truck category they were fully compete even in the last stage. De Rooy competed with Karginov for the overall victory.

A lot of people think that the last stage is just a piece of cake, but it is not. We lost the victory in the last stage. They have to race on the Dakar until the finish.

They didn’t reach the podium. But did the Dakar bring any positives? That is very clear. Such a test, they all passed, can not be simulated. The Silk Way Rally was the first test for the Queen 69, but it was completely new. Now came the long and demanding competition like the Dakar. They gathered a lot of data that they will be able to capitalize next time.