All the 11 MINI ALL4 Racing that started into the 2014 Dakar in Rosario, Argentina, also crossed the finish line on 18th January in Valparaiso, Chile.

The Monster Energy X-raid Team and Team X-raid performed a true feat, this year: all the 11 MINI ALL4 Racing that started into the 2014 Dakar in Rosario, Argentina, also crossed the finish line on 18th January in Valparaiso, Chile. First of all, the Spanish-French pairing Nani Roma / Michel Périn who secured the win, with their yellow MINI ALL4 Racing. 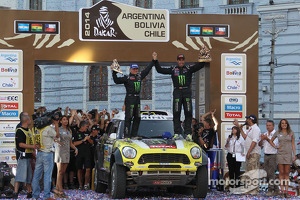 But they weren’t the only MINI ALL4 Racing drivers on the podium as Frenchmen Stéphane Peterhansel and Jean-Paul Cottret took their black MINI ALL4 Racing to second position, with Nasser Al-Attiyah (QAT) and Lucas Cruz (ESP) in the white MINI ALL4 Racing coming third. For the driver from Qatar, it was the first rally he contested at the wheel of MINI ALL4 Racing. Only on 01st January, he made his first outing with the car: “The MINI ALL4 Racing is a very good vehicle,” he said. “Fast and solid. Contesting the Dakar with it was big fun.”

The positions five and six also were clinched by Monster Energy X-raid Team drivers: Orlando Terranova (ARG) / Paulo Fiúza (POR) finished fifth, with their orange MINI ALL4 Racing. “Our pace was good,” revealed Terranova, “But we just made too many mistakes, this year. A pity that we lost our fourth place at the very end of the event.” Right behind him, Krzysztof Holowczyc (POL) and Konstantin Zhiltsov (RUS) in the red MINI ALL4 Racing came sixth. “I definitely had set myself the goal to secure a better result,” admitted the Pole, “But we had to cope with a lot of bad luck in week one. Therefore, we had to start from far behind, afterwards, thus having to race in the dust of numerous other drivers. At least, things tended to improve, in the closing stages of the Dakar, and we had the chance of pushing again.”

One of the biggest surprises was Martin Kaczmarski who contested his very first Dakar. As youngest driver in the car category, the Pole secured the outstanding ninth place. Together with his experienced co-driver, Portugal’s Filipe Palmeiro, he delivered – first of all – on a very consistent level, with his MINI ALL4 Racing. “It was very, very tough,” admitted Kaczmarski, “And it took me some days to find the proper rhythm. But from that point in time, things went really well.” 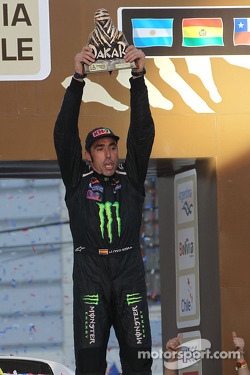 Russian Vlaidmir Vasilyev and his Ukrainian co-driver Vitaly Yevtyekhov took their MINI ALL4 Racing to 10th place. Consequently, seven of the top-ten positions were secured by the MINI ALL4 Racing! And 11th and 12 positions also were clinched by two MINI ALL4 Racing: together with his French navigator Gilles Picar, Chile’s Boris Garafulic came 11th, thus securing the best Dakar result in his career to date. “I’m extremely happy,” said the Chilean, “Although it’s a pity that we didn’t quite make it to the top 10.

Nonetheless, we once again demonstrated that delivering in consistent style is the key for securing a good result in this rally.” 12th position was secured by the Argentinean pairing Federico Villagra / Jorge Perez Companc who contested their first Dakar with the MINI ALL4 Racing. Unfortunately, they missed a waypoint in stage six and received a one-hour time penalty, as ‘reward’. “We had a lot of fun and I think that we succeeded in convincing the one or the other that we have got what it takes to deliver in competitive style,” said Villagra.

By finishing 19th, the two Germans Stephan Schott and Holm Schmidt made a small dream come true, with their MINI ALL4 Racing. “Finally a result with the ‘1’ as first figure,” ‘Schotti’ beamed. “The Dakar was extremely exhausting and our forward roll also hadn’t been on the agenda. But the X-raid guys did a fantastic job. In this Dakar, I finally delivered on a consistent level, made nearly no mistakes and as result,

I secured this great 19th place.” Meanwhile, the Chinese pairing Zhou Yong / Hong Yu Pan finished 31st, in their first Dakar rally. “The MINI is a great car,” said Zhou, “but I realised that I still have to learn a lot to get the maximum out of the car. I hope that I will be able to secure better results in the coming Dakars.”

“I’m extremely proud of everybody,” Team Manager Sven Quandt beamed. “To make it to the finish with all the 11 MINIs ALL4 racing and secure these fantastic results is just astonishing. I’m really delighted for Nani. After all the years he displayed his great team spirit in he now secured the Dakar win. And what should I say about the MINI ALL4 Racing? Its results and its reliability speak for themselves.”