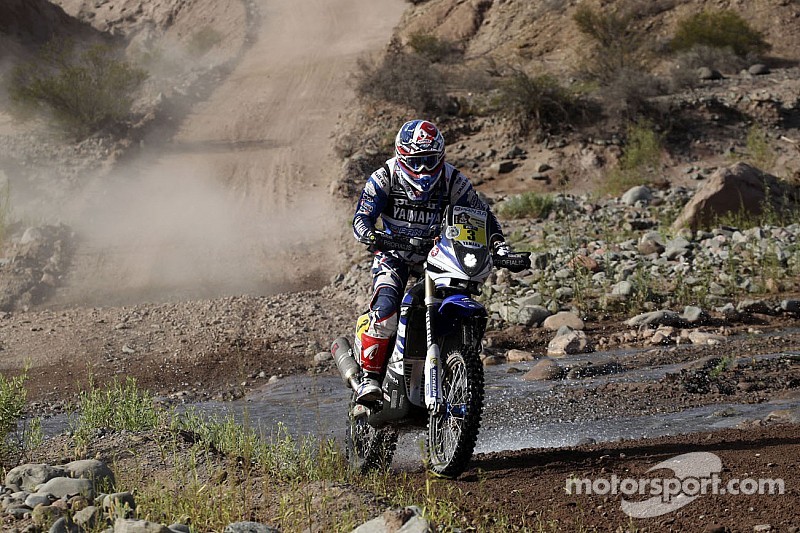 Yamaha teams are celebrating in the quad category.

The 2015 Dakar has once again established itself as the world’s toughest rally-raid challenge. Yamaha Netherlands Verhoeven Team’s Frans Verhoeven and Yamaha Factory Racing Rally Team Yamalube’s Olivier Pain had to battle fierce conditions on the last stage to finish in 7th and 11th place.

The start of the 13th race day was already atypical due to the reverse start order, but more havoc was on its way. Soon torrential rain hit the thirteenth stage, making the course extremely slippery.

To finish a Dakar is always an achievement and to finish in the top 10 is something to be proud of...

Riding in groups, the competitors slowly made progress on their journey to Buenos Aires where the podium at the Tecnópolis awaited, but before they could reach their final destination the circumstances got so dangerous that it was decided to stop the race at CP2.

The cut- short last special of 101 km saw no changes to the overall positions of the leading Yamaha riders. Olivier Pain finished in 10th place overall, ahead of fellow Yamaha mounted Frenchman Xavier De Soultrait in 13th place, while their Dutch colleague, Frans Verhoeven, signed off his Dakar career with a solid 15th place overall.

Yamaha teams are celebrating in the quad category. Rafal Sonik won the 2015 Dakar in his category with a lead of almost three hours over 18 year old and fellow Yamaha Raptor 700 rider Jeremias González Ferioli. The Polish rider took extra care today not to get caught out in the final stage and rode sensibly to 2015 title victory. He arrived at CP2 in eighth place, 8’16 minutes behind today’s winner Willem Saaijman, who kept fellow Yamaha rider Christophe Declerck at bay with just six seconds between them.

After the end ceremony the riders have earned some well-deserved rest. They have withstood more than 9000 km of incredible heat, terrible cold, rocks, bumps, fesh-fesh, mud, sand, and vegetation – something only the most hardened endurance riders can accomplish. The riders can be proud finishing the toughest rally-raid in the world and are already looking forward to their next adventures.

Olivier Pain (11th / 07'59, overall 10th / 3h09'09): “To finish a Dakar is always an achievement and to finish in the top 10 is something to be proud of and I am happy to have got the bike home for the team who worked so hard, both prior to and during the rally. Of course we came here with the intention of challenging for the victory and so from that point of view my result is a disappointment. Although we did a lot of testing before the Dakar we lacked race kilometres. The base of the WR450F Rally is clearly good and the engine is strong and reliable, but the bike is effectively brand new and we need to develop it further if we are to realise its full potential.”

Xavier De Soultrait (9th / 05'54, Overall 13th / 04h20'18): “My objective at the start of this, my second Dakar, was to finish in the top 20, so I’m very happy with my result. I am also happy that I learned a lot in the process – how to set up the bike, how to ride faster in the fesh-fesh. These things you can’t learn unless you come here to race. I think I can still progress as a privateer, but there is a limit to what you can achieve. The real solution for the future is to be able to do other races throughout the year, to be able to go testing, training in Morocco and this is the direction I would like to take now.”

Frans Verhoeven (7th / 04'35, overall 15th place / 5h13'40): “A good way to end my Dakar career as a rider. These last few days I felt very comfortable on the bike and rode at the pace I used to ride. It is a pity I wasn’t able to participate in a race prior to the Dakar, because if I had I would have rode better the first week and a top 10 finish would have been possible. Of course, even if I stop as a rider, I will continue to be involved in rally-raid and enduro and have some interesting plans for the future.”