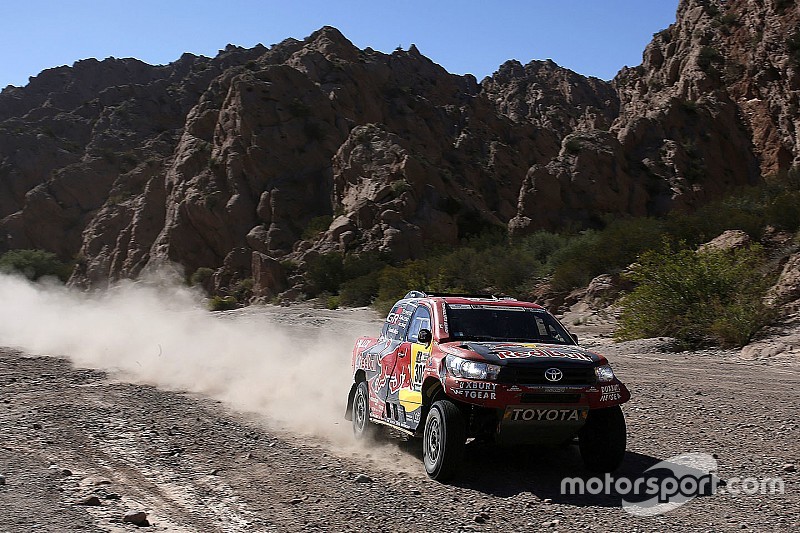 Former Dakar Rally champion Giniel de Villiers believes Peugeot would have been impossible to beat in this year’s race even if he had enjoyed a clean run.

The Toyota driver's bid for a second Dakar crown was ruined early on as a fuel pump issue cost him over half an hour on the third stage, and he lost further ground two days later with navigation trouble.

He eventually recovered to finish fifth, just under two hours behind winner Stephane Peterhansel – who led home an all-Peugeot top three ahead of Sebastien Loeb and Cyril Despres.

With fellow Toyota driver Nani Roma finishing as best of the non-Peugeots in fourth, still more than an hour adrift, de Villiers believes the French marque was simply unbeatable.

"For sure Peugeot was too strong this year," he told Motorsport.com. "Obviously they did a great job being 1-2-3, but we had no chance.

"We're best of the rest, we need to look at what we can do to beat them. We didn't have a perfect rally, we had too many things go wrong, which cost us unnecessary time.

"But even if we had a perfect rally with no mistakes, I don't think we could've beaten them [the Peugeot drivers]. They were too fast."

Toyota had been developing a two-wheel drive 'Evo' version of the Hilux for the 2017 Dakar, but was forced to revert to the four-wheel drive car as the new machine wasn't ready in time.

De Villiers believes this meant Toyota was at a particular disadvantage at high altitude, as regulations allow two-wheel drive cars a significant weight break that becomes even more critical as engines lose power in thinner air.

"It looks like the buggy now with two-wheel drive, a lot of suspension [travel] and big wheels is definitely more advantageous than a four-wheel drive."

Asked about Toyota's 2018 Dakar attack, de Villiers added: "It looks like we'll have to come with a two-wheel drive car if we want to compete against them [Peugeot]."