KTM rider Toby Price says that holding the lead of the Dakar Rally at the halfway stage of the event "does not mean one thing".

Bidding for his third Dakar victory, Price won two of the first six stages of the Saudi Arabian event and goes into Saturday's rest day in Ha'il at the head of the order.

Reflecting on the final competitive running before rest day, Price praised Benavides and another Honda rider, Jose Ignacio Cornejo, for their speed opening the road, admitting he was content to follow the pair once he caught up with them.

"Got to give credit where credit is due, Kevin and Cornejo running at the front today, the pace they were doing, they navigated extremely well and did an amazing job," said Price.

"I pushed hard at the start to try and make a bit of time, and it took a while to catch them, but once we got onto the back of them I just tried to stay smooth and consistent.

"I had one little get-off and I think I twisted the roadbook tower a bit and the toggle switch wouldn’t work, so I had to do it by free hand a little bit. But the pace they were doing, I couldn’t have done any faster. They nailed it all day.

"It’s a good result and a good starting position for Day 7, and overall we are back in the lead." 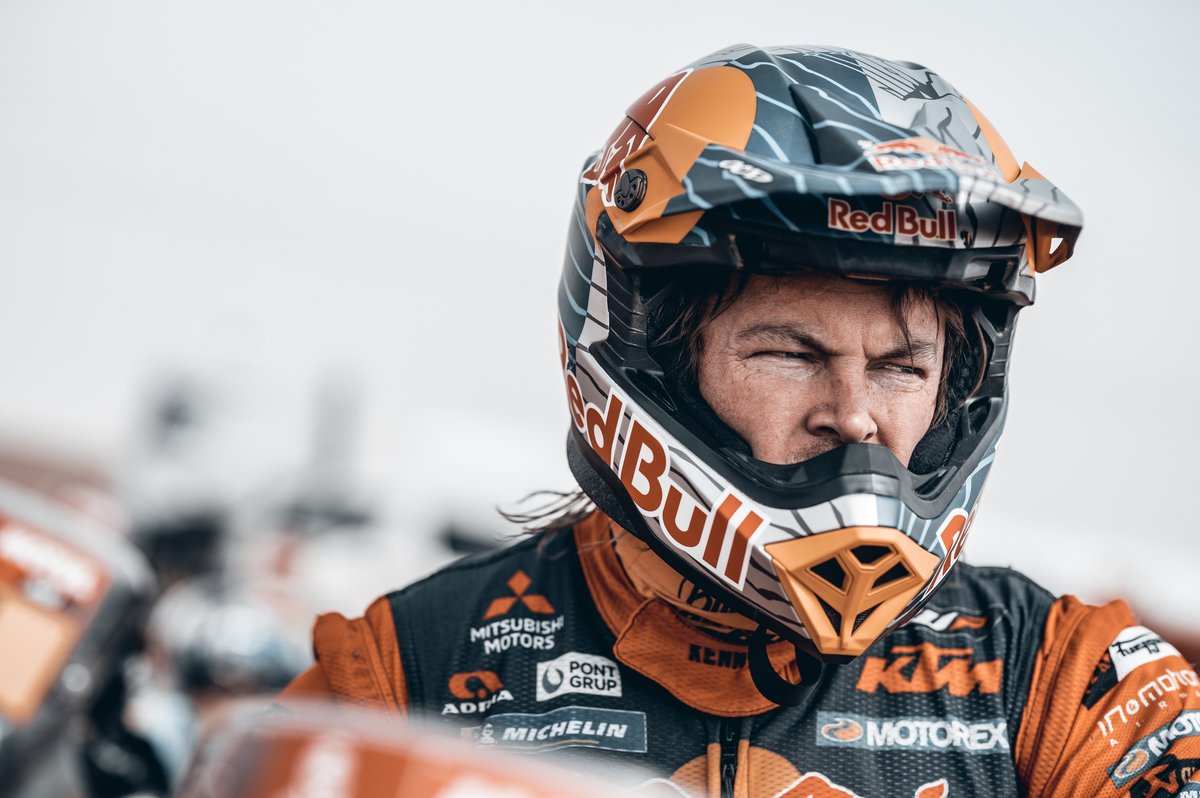 Asked if leading at halfway held any significance, Price replied: "It does not mean one little thing. The only time you know it’s a good day is after you cross the finish line on Day 12.

"There’s still a long way to go. Just gotta keep charging on, stay healthy, look after the bike and hopefully we’ll have a good result by the end of the week."

Price named Thursday's fifth stage of his lowest point of the rally so far, despite the fact he finished third and only 1m20s behind that day's winner Benavides.

"I finished in a pretty good spot, but the navigation I was quite disappointed with myself," explained the Australian. "I made a lot of mistakes. We need to clean that up a little bit and we should be good to go.

"The bike has been really good this week. [On Thursday] a brake pedal came off, but nothing major. Everything is good and hopefully the bike will get us through the second week."

KTM has only one of its other factory riders in the top 10 at the halfway point of the rally, with Sam Sunderland in sixth and within five minutes of the lead.

Rookie Daniel Sanders is 12th, only 18m01s off the lead, while Matthias Walkner is 24th overall after losing over two hours on the second stage with a clutch problem.