© 2021 Motorsport Network. All rights reserved.
TV Tickets Fashion Giorgio Piola Jobs
Previous / A different kind of holidays for El Martillo Racing Next / X-Raid and their Minis are the ones to beat
Dakar Special feature

A sneak-peek at Robby Gordon and BJ Baldwin’s new race vehicles before they shipped them off to Argentina.

Robby Gordon and Toyo Tires are veterans of the Dakar, and of winning off-road championships. Gordon returns this year with co-driver Kellon Walch driving the #305 SPEED Energy / Toyo Tires / HST “Gordini” racer. It is a brand new 2014 Gordini SUV built to FIA specs with a powerful V8 engine.

The Gordini SUV is smaller and lighter than any truck Gordon has built and raced at Dakar previously. It is a purpose-built Rally Car and the test mule has been put through the paces. Soon it will be seen if all of the R&D and testing over the last six months will pay dividends at the 2014 Dakar Rally.

Since first competing in the Dakar in 2005, he has recorded nine Dakar rally stage victories, and was the first American to win a stage in the Dakar Rally Car Division with his Toyo Tires-equipped HUMMER. In 2009, he finished third overall in the Dakar, while being the only two-wheel-drive vehicle to finish in the top-ten. 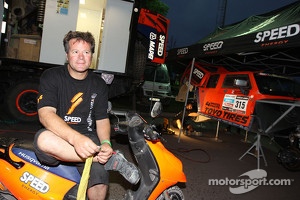 “The previous Hummer was designed and built for the African Desert; the Gordini is designed from our experience in South America,” said Gordon.

Gordon went on to say “Since 2006, when we first went to Dakar with our own car, Toyo Tires has been there with me. In last year’s Dakar we had no tire failures in the entire Rally – truly amazing. With that same kind of performance and the fact that we have had the fastest car for several years, I believe this is our year to capture the overall title in the world’s toughest race.”

BJ Baldwin will drive the #318 mid-engine EVR Proto VX Rally Raid Concept equipped with an LS7 engine. Owned by Eric Vigouroux of EVR / Jefferies Racing, its design is inspired by Class 1 buggies. Manufactured in California by Class 1 2013 SCORE Baja 1000-winner/builder Damen Jefferies; the lightweight truck has 22-inches of wheel travel and can reach speeds over 118-mph. Baldwin’s navigator for the rally will be Dakar and SCORE Baja 1000 veteran, Quinn Cody.

“I feel more confident going into this year’s Dakar than previous years,” said Baldwin. “We are in a more competitive vehicle and we are using the 37-inch Toyo Open Country M/T which I believe to be the most high-performance off-road tire in existence.”

This is Baldwin’s second time racing Dakar in South America, the first being in 2010. He also competed in the 2008 Central Europe Rally, in which he finished seventh overall and first in class.

A different kind of holidays for El Martillo Racing

X-Raid and their Minis are the ones to beat