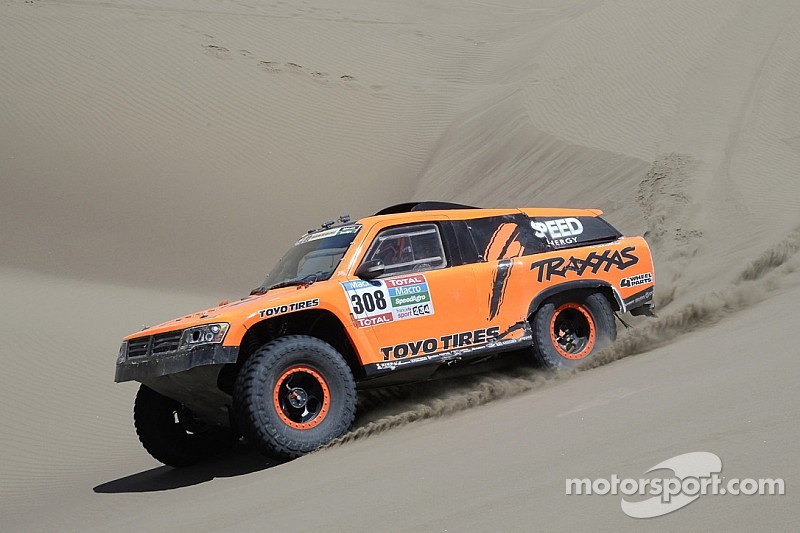 Robby Gordon brought his Gordini home in fourth place in the 277-kilometer stage.

Like Thursday’s Stage 5 race, Gordon again had a strong early run, leading through the mid-point of the stage. While he maintained the eventual winner’s pace through most of the second half of the race, it was the final timed section on the course – in deep sand dunes – where Gordon and navigator Johnny Campbell gave up nearly two minutes to the top-three finishers.

Gordon’s fourth-place finish marked his third top five in six stages of the Rally. He finished the first stage in second position and yesterday’s fifth stage in third.

Before Friday’s stage, the usual heavy attrition rate had already sidelined 55 of the 137 cars that started the Rally. Making it to Monday’s rest day for the cars will be a challenge as the teams enter a new country with rough terrain and extreme altitude.

Saturday’s Stage 7 is scheduled for a total of 717 kilometers (446 miles), of which 321 kilometers (199 miles) will be the timed section for the cars. Gordon will start in his finishing position of fourth from Friday, which will again be a favorable spot among the elite cars remaining in the Rally. The teams will venture into Bolivia for the first time and right from the start, the cars will gradually climb to more than 3,500 meters (nearly 11,500 feet) where the timed stage will begin.

Terranova shines as De Villiers inches closer to the lead