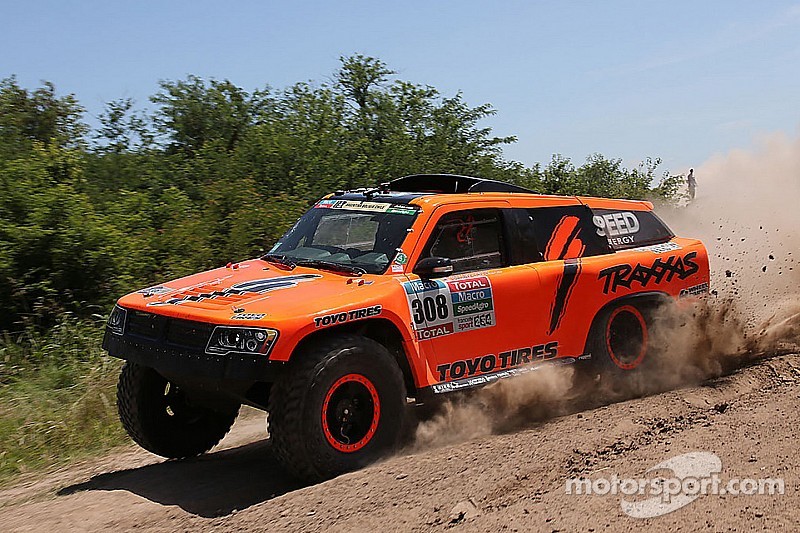 SAN JUAN, Argentina – Following a very successful second-place finish in the opening stage of the 37th Dakar Rally, Robby Gordon suffered early brake problems and additional issues during Monday’s second stage, leaving him significantly behind in his quest to become the first American to win the Dakar Rally.

Although Gordon and navigator Johnny Campbell were able to repair the brake troubles that surfaced in the first few kilometers of the race, the Traxxas/Toyo Tires Gordini was passed by 113 cars on the course during maintenance. The team was able to get back to race speed and overtook many of the competitors until the Gordini came to a rest approximately 30 kilometers (18 miles) from the finish with a yet-unannounced issue.

Gordon was unable to fire the car again, requiring a tow to the bivouac. Despite being towed, he will be able to start the third stage of the Rally on Tuesday provided there are no terminal engine issues.

“Everybody is going to have problems on this Dakar. I've lost 4 hours, but it's only the second day of the race. I'm not done for yet, no way."

Gordon finished Stage 2 in 9 hours, 12 minutes and 26 seconds, far behind the time set by stage winner and overall leader Nasser Al-Attiyah of Qatar who drove his Mini to the finish in 5 hours, 4 minutes and 50 seconds. Gordon now finds himself 4 hours, 7 minutes and 36 seconds down to Al-Attiyah overall. He has 11 stages remaining to make up as much of the deficit as possible and to add to his impressive nine career stage victories in his 10-year Dakar career.

Al-Attiyah was 8 minutes and 30 seconds faster than second-place finisher Giniel De Villiers of South Africa, and 10 minutes and 4 seconds better than Bernard Ten Brinke of the Netherlands. Those three drivers hold the overall top three spots in the Rally.

Day 1 leader Orlando Terranova of Argentina slipped to 10th in the overall standings with a 10th-place finish in the stage, 24 minutes and 1 second behind Al-Attiyah.

Tuesday’s third stage (258 kilometers/160 miles) will take drivers from San Juan to Chilecito through one of the most beautiful regions in Argentina, overlooking steep peaks and plunging into deep canyons. Gordon has no other choice but to drive hard and finish among the leaders in hopes of an improved starting position for future stages.

Follow the Dakar Rally through live timing and scoring as well as live updates at planetrobby.com. NBCSN will provide daily highlights beginning Jan. 5 from 4:30 to 5 p.m. ET.