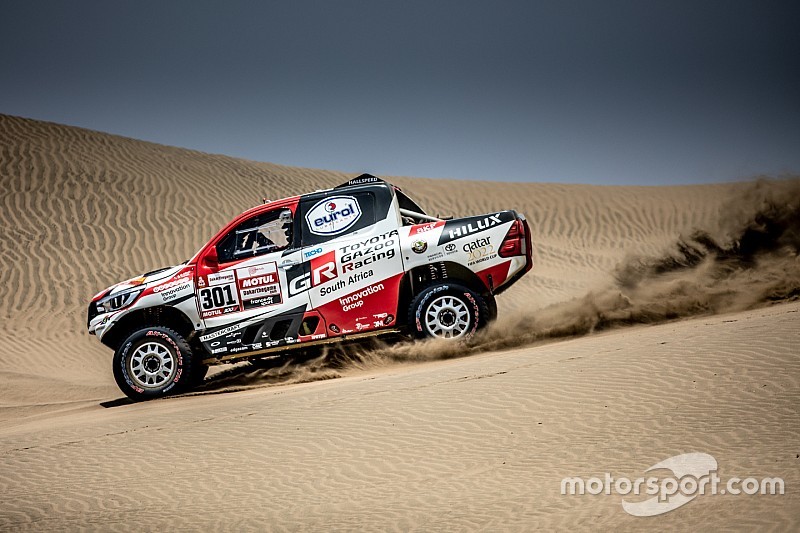 The Qatari completed the dune-populated 84km timed stage near Pisco, which came after a lengthy road section that started at Peruvian capital Lima, in 1h1m41s.

Al-Attiyah, a two-time Dakar winner whose most recent triumph came in 2015, ran second on the road behind reigning champion Carlos Sainz.

His Toyota Hilux set the pace at both waypoints and ultimately caught up with Sainz's X-raid Mini buggy by the time they completed the stage.

Sainz held on to second place, but was just one second clear of the lead X-raid Mini 4x4 car, that of FIA World Cup for Cross-Country Rallies champion Jakub Przygonski.

The Russian, returning to the Dakar after instead competing in the Africa Eco Race for two years, was fourth, leading Mini 4x4 driver Yazeed Al-Rajhi, while de Villiers made up the top six and ten Brinke took eighth behind Stephane Peterhansel in a Mini buggy.

Sebastien Loeb, competing in a PH Sport-run Peugeot 3008 DKR, had a quiet start to his stint as a Dakar privateer, finishing outside the top 10 with a six-minute gap to Al-Attiyah.

He was beaten by both of his PH Sport teammates, Harry Hunt and Pierre Lachaume. Hunt slotted in in ninth ahead Mini buggy driver Cyril Despres – who had swapped co-drivers with Peterhansel for the 2019 edition.

In the Trucks class, reigning champion Eduard Nikolaev topped the first stage, but the Kamaz driver was only 18 seconds clear of Iveco's Ton van Genugten.

Van Genugten's teammates Federico Villagra and Gerard de Rooy completed the top four, while the rest of the Kamaz trucks took the spots from fifth to seventh.

The stage for SxS utility vehicles was likewise topped by the defending winner in Reinaldo Varela, who led Chaleco Lopez and Gerard Farres.