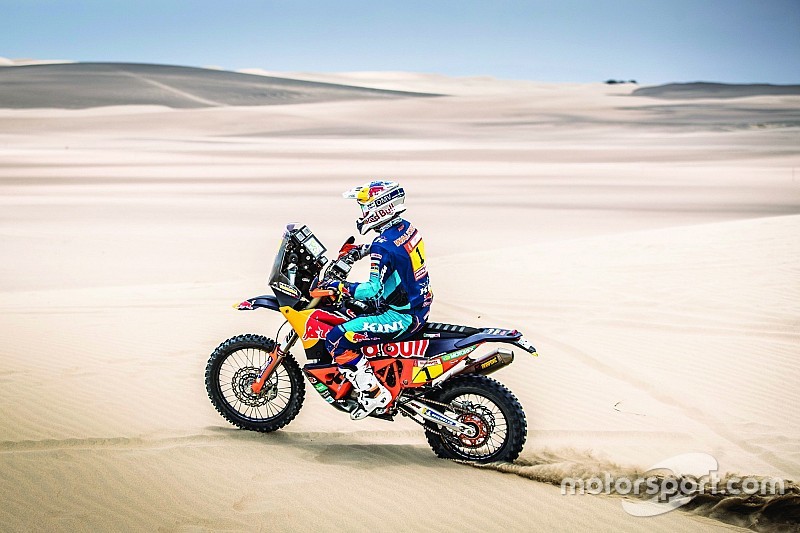 Reigning Dakar champion Matthias Walkner topped the second stage of the rally after trailing Ricky Brabec for most of the day, as Honda's Joan Barreda kept the overall lead.

Walkner and Brabec were closely matched throughout the entire day, the duo running less than 10 seconds apart in the first three waypoints.

Brabec was able to inch away during the middle phase but before he could run away with the stage win, Walkner closed down the gap and went on to beat the American by 22 seconds.

There are only two seconds between the pair in the overall order, with Walkner ahead, but they are only in second and third as Stage 1 winner Barreda remains ahead.

Barreda was best of the rest in Stage 2 in third but he enjoyed a strong finish, nearly halving his gap to the frontrunners and keeping a 1m31s overall lead as a result.

Walkner's KTM teammate Toby Price had a poor start to the day as he lost three minutes already before the opening waypoint, but the 2016 champion did well not to lose any more time and took fourth.

He beat Husqvarna's Pablo Quintanilla by 18 seconds - they also hold fourth and fifth in the overall standings but with the Chilean ahead of Price.

Sam Sunderland (KTM) was sixth in the stage ahead of Adrien van Beveren, who led Yamaha's efforts but was still over nine minutes off the pace.

Nicolas Cavigliasso established himself as the favourite in the quad class by taking a dominant second win in Stage 2.

Cavigliasso was in a class of his own, ending the 342 km stage with a lead of 11m18s over fellow Argentinian Gustavo Gallego.

With that, he already has a lead of 21m14s over Gallego in the overall order.

Alexandre Giroud put pressure on Gallego for second but in the end settled for third, ahead of the Chilean Giovanni Enrico and Czech racer Tomas Kubiena.

Giroud is also third in the overall standings ahead of Kubiena and Jeremias Gonzalez, who was second on Day 1 but was nearly half an hour off the pace in Stage 2.