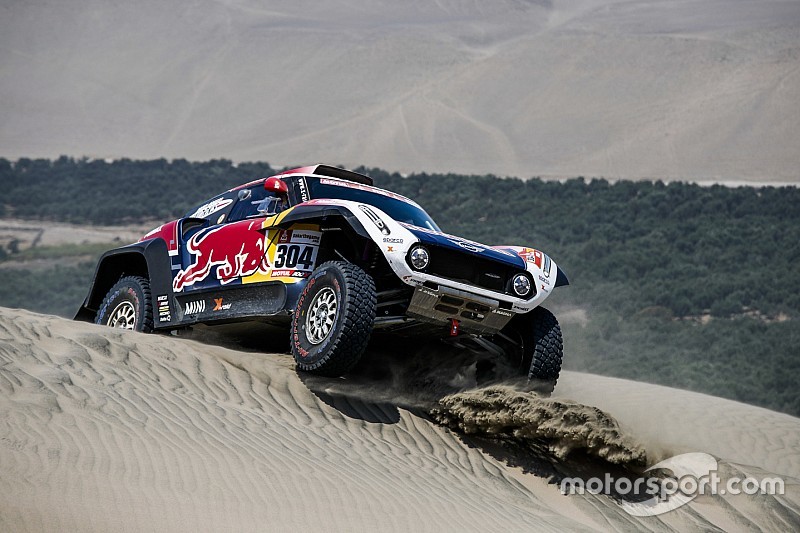 Loeb gave up over half an hour around 50km into the stage to fix an electrical fault, and while his pace was unmatched from then on, it wasn't enough to mitigate the damage to his victory hopes.

The start of Monday's stage, which looped around San Juan de Marcona and featured 331 timed kilometres, was postponed by nearly an hour due to fog in the morning.

Peterhansel ran neck and neck with fellow X-raid driver Nani Roma through the opening waypoints, but his Mini buggy soon overpowered the 4x4 car of the Spaniard.

The 13-time Dakar champion was 4m33s clear of Roma at the finish to clinch his second stage win of the rally and make a substantial dent in Nasser Al-Attiyah's marathon lead.

Al-Attiyah was left first on the road after Loeb's early drama, and dropped further and further off the pace as the stage progressed, ending up 12 minutes slower than Peterhansel.

But the Toyota driver still retains a 29-minute overall lead, which he will look to protect over the final stages, featuring 785 kilometres of timed running in total.

Roma is nine and a half minutes back from Peterhansel in third place, and has a 16-minute buffer over Loeb in the battle for the final podium spot.

Defending Dakar champion Carlos Sainz was third on the day in his Mini buggy, and has broken back into the overall top 10, but is more than five hours down on Al-Attiyah.

The last Mini buggy, that of Cyril Despres, was fifth fastest, as the former Dakar bikes champion continued to hold that same position in the general classification.

In the Trucks class, Gerard de Rooy was a dominant stage winner, solidifying his stranglehold on third place.

Marathon leader Eduard Nikolaev was third-fastest, and is now well clear of Kamaz teammate Dmitry Sotnikov in the overall standings.

Reigning class champion Reinaldo Varela is now back into the lead as a result, but stage winner Chaleco Lopez trails him by only four minutes.

Robby Gordon to make most of chance to return